Assume that it is now December with three months to expiry of the March contract and that the option price is not payable until the end of the option period, or when the option is exercised.

(i) to calculate the net sterling receipts/payments that Fidden might expect for both its three and six month transactions if the company hedges foreign exchange risk on:

(ii) If the actual spot rate in six months time was with hindsight exactly the present six months forward rate, calculate whether Fidden would have been better to hedge through foreign currency
options rather than the forward market or money market.

(iii) to explain briefly what you consider to be the main advantage of foreign currency options.
ANSWER
(1) Forward market 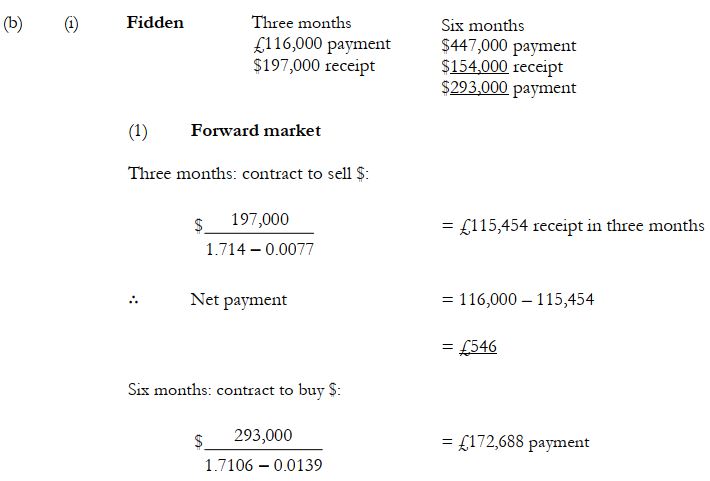 (Tutorial note: this does not provide enough $ because the price of the option is payable in $ but it would be a good enough estimate in the examination and in fact is cheaper than going to fifteen contracts to obtain the full $ requirement.) 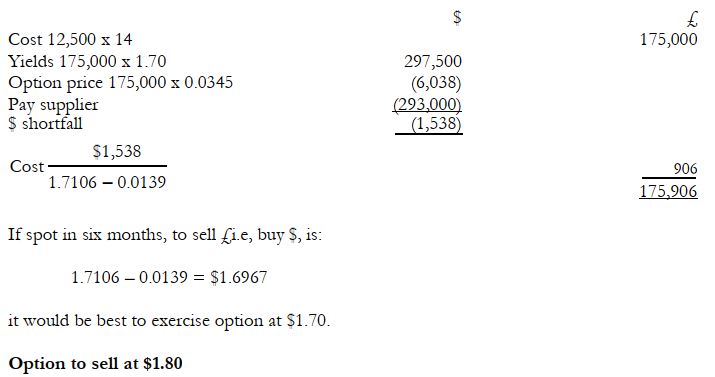 Overall the company, with the benefit of hindsight, would have been best to hedge through the
$1.80 foreign currency options.

(iii) The advantage foreign currency options have over other methods of covering exchange risk is that they offer the opportunity to take advantage of beneficial movements in the exchange rate i.e, if the rate moves against the holder of the option, the option can be exercised (to cover the
„downsiderisk‟) whereas if the rate moves in favour of the holder, the holder can allow the option to lapse and instead profit from the favourable movement in the exchange rate. This is not possible with a forward or futures contract.