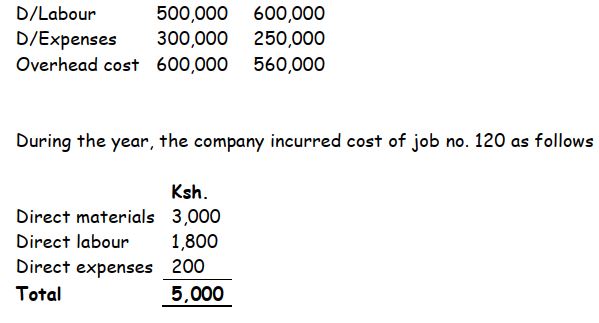 Introduction:
Overhead refers to the total cost of indirect materials, indirect labour and indirect expenses. Indirect costs are those which cannot be identified with the production of some specific goods or services. These costs are incurred for the organization as a whole.

Allocation of overhead cost
Overhead allocation occurs when an overhead can be identified as belonging to a specific cost centre and is charged to that centre. Therefore there is no need for apportionment of such overheads.

Appointment of overhead cost
Overhead apportionment occurs when overheads cannot be identified as belonging to a specific cost centre and are therefore shared out on an equitable basis. Overheads though not directly related to the items being manufactured, should finally form part of the total cost of the products being manufactured. If an organization has two or more departments each carrying out a separate activity, then the overheads of the organization should be divided among these departments equitably. 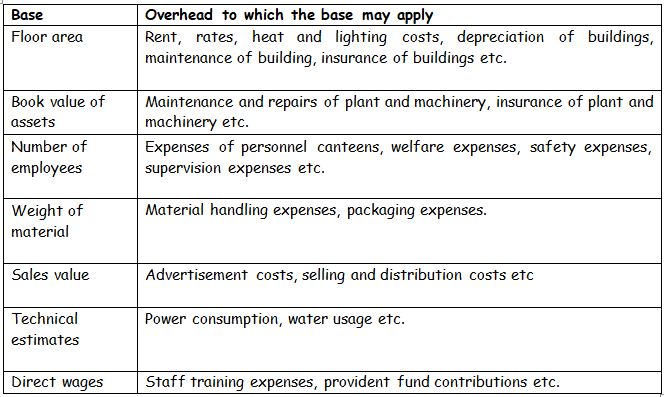 Illustration 2
A modern company (X ltd) has 4departments A, B, C and D. The actual cost for a given period was extracted from their books as follows:

Required:
Apportion the above costs to the various departments on the basis of the most equitable basis. 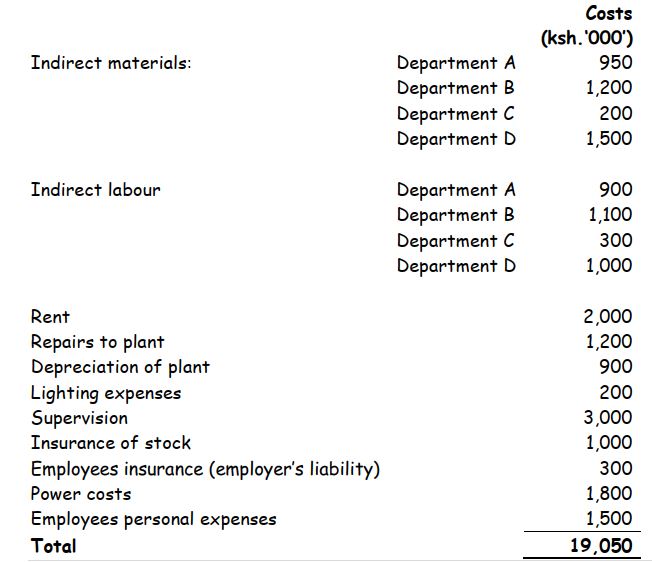 The following data is also available in respect of the 4 departments:

Required:
Apportion the above costs to the various departments on the basis of the most equitable basis.

Algebraic/simultaneous method
This method transfers the overheads of service departments modeling the problem into a system of simultaneous equations and solving it using any of the conventional methods. 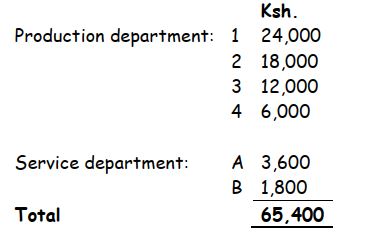 It has been estimated that the cost of running service departments can be charged to the various departments according to the following percentages: 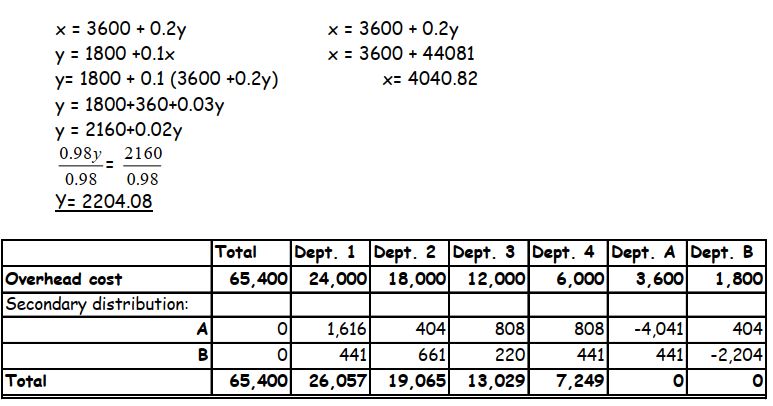 Illustration
MMC Limited operates two production department and two service department. The budgeted cost and normal activity levels for each of the four departments are given below:

Illustration
A company estimated its overhead cost in a given period to be Ksh. 3,000,000 and for an estimated output of 150,000 units.
Required:
Determine;
i) The OAR
ii) If the actual output turned out to be 175,000 units for which the actual overhead cost of Ksh. 3,200,000 was incurred, compute the over/under absorbed overhead. 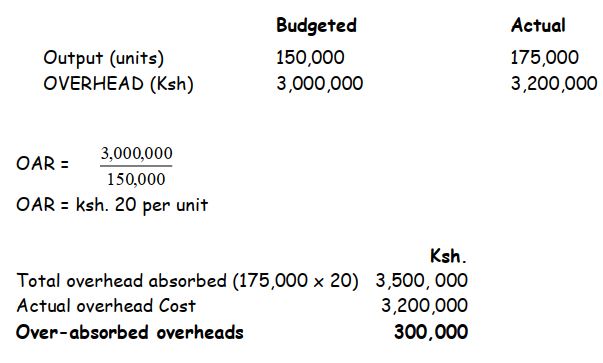 Illustration II
A company budgeted to incur an overhead cost amounting to Ksh 6 million for a budget activity level of 50,000 units. During the year, the company produced 47,500 units for which they actually incurred a total overhead cost of Ksh 5 million. 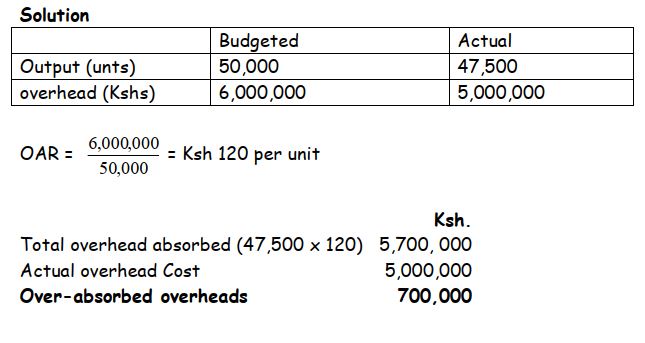 2. Direct material cost percentage method
Under this method, the amount of overhead cost to be absorbed a cost unit is determined the cost of direct materials consumed in producing it. 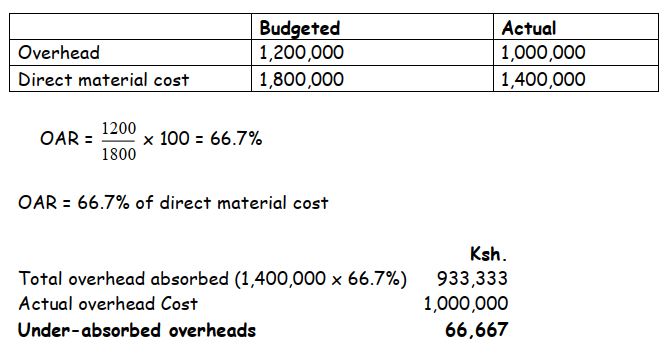 3. Direct labour cost percentage method
Under this method, the amount of overhead cost to be absorbed a cost unit is determined the cost of direct labour consumed in producing it.

The following information was obtained from the books of ABC Ltd

Required:
i) Calculate the OAR
ii) Calculate the over/under absorbed overhead
iii) Determine the selling price of job number Y200 given that the company has a policy of 20% mark-up. (the company absorbs overheads on the basis of direct labour cost) 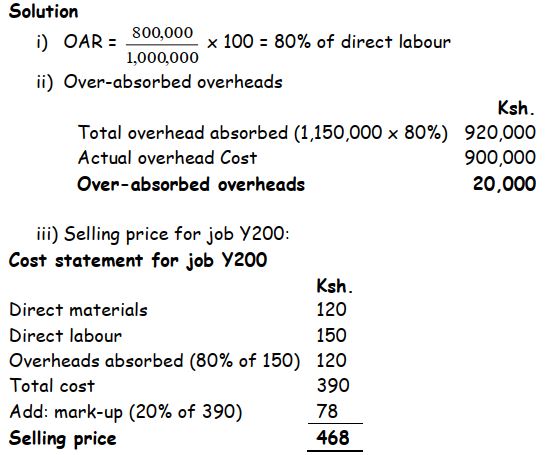 The following information was obtained from the books of KCA Ltd 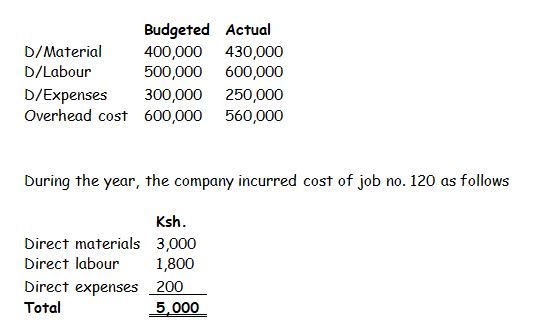 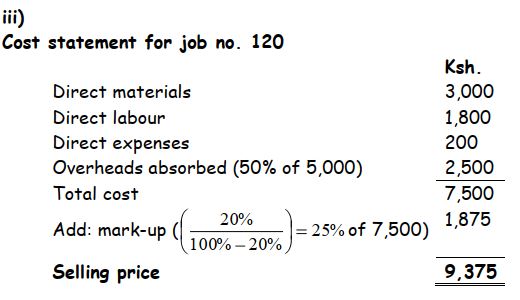 Under this method, the amount of overhead cost to be absorbed a cost unit is determined the direct labour hours consumed in producing it.

KCA Ltd budgeted to incur an overhead cost amounting to ksh. 3.5 million and to work ksh. 175,000 direct labour hours. During the period the actual results was recorded as follows:

The cost accountant has extracted the following details with respect to job K002.

It‟s the policy of the company to charge a profit margin of 25%. The company absorbes overheads on the basis of direct labour hours 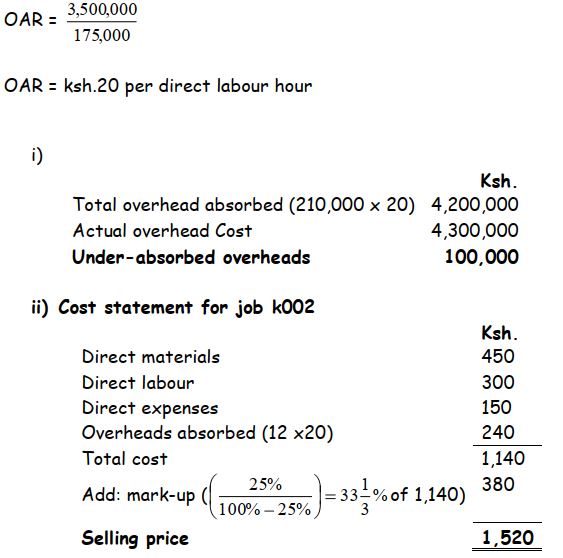 Under this method, the amount of overhead cost to be absorbed a cost unit is determined the machine hours consumed in producing it.

During the same period, the company‟s cost accountant extracted the full information with respect to job No. JK010 as follows: 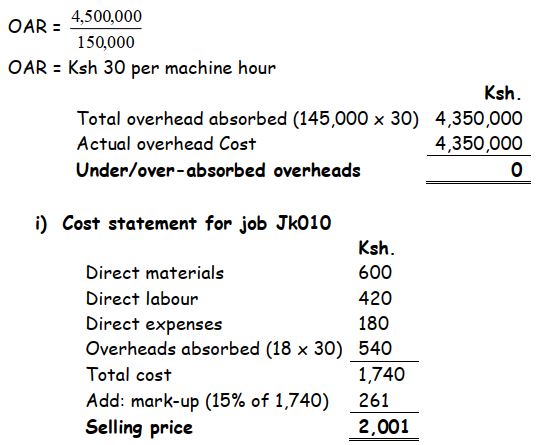 BCD  ltd  manufactures  office  and  household  furniture  to  customers‟  specifications. Because of the specialized nature of the manufacturing process, each job is treated separately for costing purposes. There are two stages in the manufacture of each item namely, Assembly and Finishing. In the assembly department, overheads are absorbed on the basis of prime cost incurred in that department. In the finishing department, overheads are applied on the basis of total accumulated cost on the job in both the two stages inclusive of overhead absorbed in assembly. The selling price of the item is then determined applying the usual 40% profit margin.

The following information is provided about budgeted data for the next financial period:

Calculate the overhead absorption rates for each production

Job no. 148 shows the following data concerning its production

Prepare the cost statement for this job and indicate the proposed final selling price.

The following data relates to the actual manufacturing operations as accumulated for the whole financial period:

Calculate the amount of overhead over applied or under applied for the company as a whole.

The following information relates to operations for the year ended 31 October 2010. 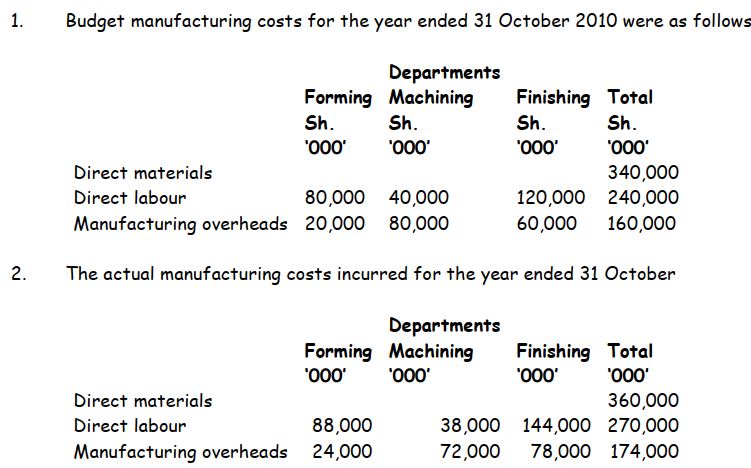 While there were no finished goods or work-in-progress inventories at the beginning of the year, stocks on 31 October 2010 were made up as follows:

The above balances include actual direct materials, direct labour and absorbed overhead costs.

Manufacturing overhead costs are absorbed into products on the basis of direct labour costs, at rates pre-determined at beginning of the year, using the annual budgeted