Matibabu Pharmacia Ltd. recently carried out clinical trials on a new drug which was developed to reduce the effects of diabetes.

The research and development costs incurred on the drug amount to Sh.160 million. In order to evaluate the market potential of the drug, an independent research firm conducted a market research at a cost of Sh.15 million. The independent researchers submitted a report indicating that the drug is likely to have a useful life of 4 years (before new advanced drugs are introduced into the market). It is projected that in the year the drug is launched it could be sold to authorised drug stores (chemists and hospitals) at Sh.20 per 500mg capsule. After the first year, the price is expected to increase 20% per annum.

For each of the four years of the drug‟s life, the sales have been estimated stochastically as shown below:

The new drug requires two hours of direct labour for each 500 mg capsule produced. The cost of labour for the new drug is Sh.4 per hour. New workers will have to be recruited to produce the new drug. At the end of the life, the workers are unlikely to be offered further employment with the company and redundancy costs of Sh.10 million are expected. The cost of ingredients for the new drug is Sh.6 per 500mg capsule.
Additional overheads arising from the production of the drug are expected to be Sh.15 million per annum.
Additional work capital of Sh.2 million will be required during the drug‟s 4-year life.

The drug has attracted interest of the company‟s main competitors and if the company decides not to produce the drug, it could sell the patent right to Welo Kam (K) Ltd., its competitor, at Sh.125 million. The cost of capital is estimated to be 12%. 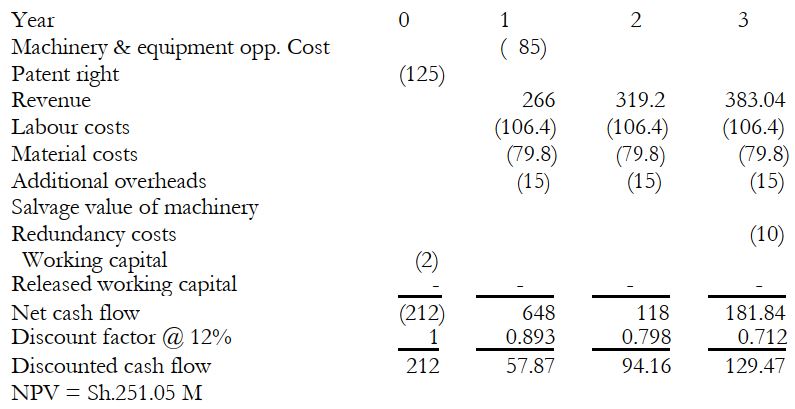 b) Based on the expected NPV the new drug should be launched as it increases shareholders wealth Sh.251.05 M.

c) Strength of expected NPV
It gives the analyst a general idea about the average expectation to assess an investment proposal. Thus the decision maker can work with the average figures to determine the average customers.

The method however does not assess the risk inherent in an investment situation. The general expected outcome may hide from the analyst the worst expected and best expected outcomes. This can lead to the acceptance of a very poor proposal.