(a) For each of the companies described below, explain which one you would expect to have a medium,
` high or a low dividend payout ratio:

(i) A company with a large proportion of inside ownership, all of whom are high income individuals.

(ii) A growth company with an abundance of good investment opportunities.
(iii) A company experiencing ordinary growth, has high liquidity and much unused borrowing capacity.
A dividend-paying company that experiences an unexpected drop in earnings from the trend.

A company with volatile earnings and high business risk.
(b) Highlight the limitations of the following methods of dealing with risk in capital budgeting:
(i) Simulation analysis.
(ii) Sensitivity analysis.

(c) The following data currently exist for the ordinary shares of four companies quoted on a stock exchange for the period between 1 July 1998 to 1 July 2003.

During the same time period (1 July 1998 to 1 July 2003), the four companies: Issued no additional shares
Had no stock dividends or split Paid no cash dividend.

i) A firm with a large proportion of high income individuals will pay low or no dividends.
Such shareholders prefer high capital to reduce their tax burden since capital gains in Kenya are tax exempt.

(iii) A company with ordinary growth and high liquidity.
Such a firm could pay high dividends and retain less. With high liquidity and much unused debt capacity, the firm can easily borrow debt capital to achieve optimal debt capital. It has access to capital markets.

(iv) A dividend paying company that experiences an unexpected drop in earnings from trend. Such a firm would pay medium dividends but if the drop in earnings persist in future it should adopt payment of low dividends.

(v) A company with volatile earnings an high business risk.
This firm should pay low dividends and retain more profits to finance its investments. With high business risk, the firm does not have access to capital markets and it is difficult to raise secure debt capital which would nevertheless increase the financial risk of the firm.

(b) (i) Limitations of simulation:

• Simulation is the process which a model is experimented upon and the results of various policies examined. The limitations of simulation models are:
• The probability distributions for the variables and of relationships between the variables can be very difficult.
• They are simplification of reality hence they are actually complex and require a substantial amount of managerial and technical time.
• Practical simulation involves the use of computers which may be a handicap without ready access to a computer.
• Results of simulation are difficult to interpret. It does not provide a clear accept/reject signal for projects.
• They do not produce optimal results. The managers make the decision after testing a number of alternative policies thus there is always a possibility that the optimum policy is not selected.
• It ignores the possibility that much of the risk may be removed through diversification.
(ii) Limitations of sensitivity analysis.

• Difficult to specify the precise relationship between a variable and NPV/I.R.A.
• It gives no indication of the likelihood of variation occurring.
• The assumed relationship is based on past outcomes and there is a possibility that this relationship may not hold in the future.
• It assumes independence of variables i.e considers the effect of a single change at a time which may be unrealistic.

It involves considerable amount of computations

This is equal to arithmetic mean of % change in share prices. Equally weighted index: 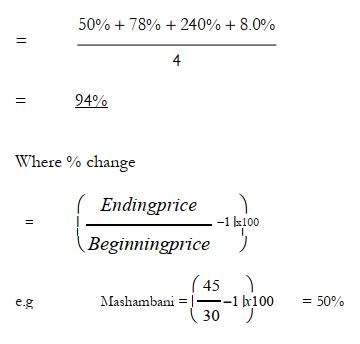