(a) The management of Wambu Limited wants to make a decision whether to change its policy of purchasing raw material stocks.

The decision about which policy to adopt will be made in time to affect purchases at the end of December 2004, when the cost of materials for January 2005 would be Sh. 20,000,000.

A growth rate of 0.75% per month is expected in purchases into the indefinite future from January 2005 onwards.

The cost of capital is 1% per month compound.

(b) You have just finished reading the budget speech the Minister of Finance where you came across the term “Public Sector Borrowing Requirements.” What is meant this term?
(3 marks)

(c) The Minister for Finance has stated that he wants to put a limit to the Public Sector Borrowing Requirements. What difficulties and economic problems are likely to arise due to this?
ANSWER
Existing policy

The purchases at end of December 2004 are for January 2005
Therefore: Expected purchases/payments = sh 20 millions in 1 months time
New policy

Assuming it‟s now 31stDecember and 0.75% growth rate in purchases and the firm has to make a 3 month purchase “now” the total amount of cost would be as follows 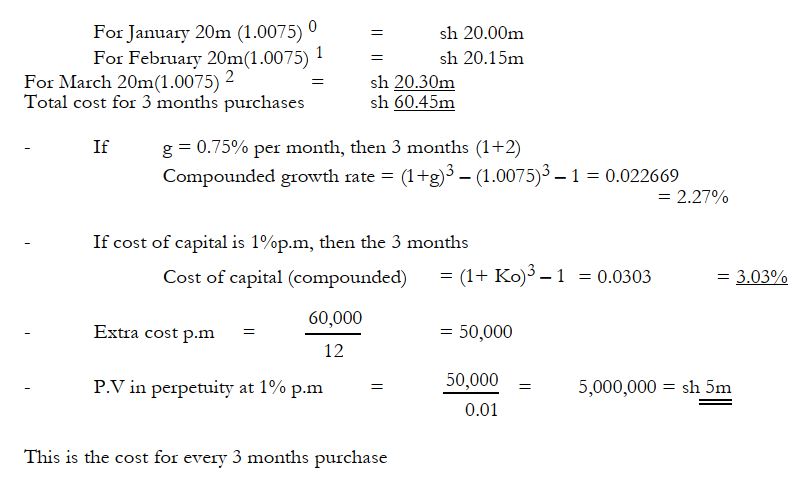 This is the cost for every 3 months purchase
Summery

It may lead to printing of money the government which will increase money supply and inflation External borrowing from donors may not be available
Without borrowing, investment the government is reduced and this will impair economic growth The government may not be able to implement its fiscal and monetary policies with Limited borrowing