(a) The board of directors of Masii Limited is divided on whether to adopt a high or low dividend payout policy. One of the directors has quoted the „dividend discount model‟ as proof that the „higher the dividends, the higher the share price.‟

(b) Leo Plastics Limited is an all equity financed company. It had three strategic business divisions as on 1 January 2004:

1. The Polythene division
It has a capital of Sh. 8 million and is expected to produce returns of 11% on capital for the next five years. Thereafter, it will produce returns equal to the required rate of return of 14% for its risk level.

3. The Container division
It has a capital of Sh. 12 million and a planning horizon of 7 years. The required rate of return on capital is 16% compared with the anticipated actual rate of 17% over the first seven years.

To maximize Po,
maximize do (1 + g) i.e. expected dividend per share maximize growth rte, g, but not beyond Ke minimize Ke but not below g.

however, payment of high dividends may increase gearing and subsequently increase Ke and reduce g. 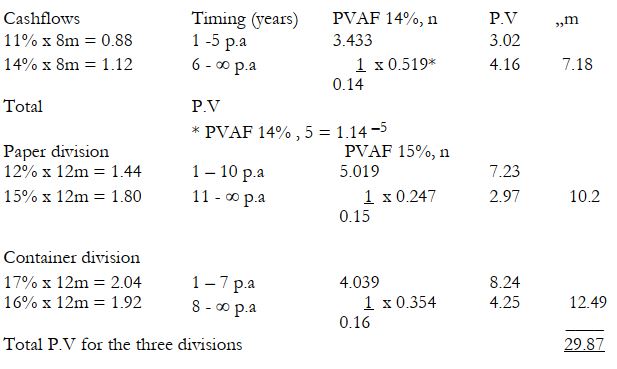 NB. Each division is a going concern and beyond the planning horizon, the

A currency swap is an arrangement between two parties to exchange debt or loan obligations denominated in different currencies. The loan obligations are nominal and the principal amounts are exchanged at an agreed interest rate. The swap is usually on agreed loan obligations and agreed term or maturity period.

1. Different currency denominations
Cash flows in the various part of a multination corporate system will be denominated in different currencies. An analysis of exchange rate and the effect of fluctuating currency value must be included in financial analysis.

2. Economic and legal Ramifications
Each country has its own unique political and economic institutions governing business. These institutional differences among countries may cause significant problems for a corporation that is coordinating and controlling worldwide operations of its subsidiaries e.g. differences in tax loss can cause a given economic transaction to have significantly dissimilar after tax consequences depending on where the transactions occurred.

3. Political Risk
This gives the potential discontinuity of a multinational operations in a host country due to the host country implementation of specific rules and regulations
e.g nationalization, expropriation or confiscation. A host country exercise sovereignty over the people and property in its territory. Hence a host nation can place constraints on the transfer of corporate resources and even expropriate without compensation to the firm.

This risk tend to be given and cannot be changed even with negotiation. A joint venture with the government or a company in the host country can reduce this risk.

4.Rates of Interest
Many rates of interest operate at any one time in different countries. Differences in the cost of borrowing or lending across borders arise from the market expectation about the future exchange rates. The finance manager need to study different interest rates and exchange rates when borrowing or lending in foreign currency.
5.Exchange Controls
Some governments impose tight controls on movement of funds out of and even into their countries. Exchange controls tend to style or reduce the trade between countries and if the company is trading in a country which impose tight exchange controls, the finance manager need to know or understand which exchange control exists and how they are applied.
6.Political System (and the role of the government)

Frequently the times under which company competes, the actions that must be taken or avoided and the terms of trades of various transactions are not freely determined in the market place especially for countries ruled dictatorship. They are however negotiated directly between the host country and the multinational corporation. If the finance manager is trading with or in the country that is ruled dictatorship, the rules of trading can appear to be inflexible or irrational. The finance Manager needs to adopt its style to conclude successful negotiations in
7. such regime.

Cultural and Religious Differences
Different countries have unique cultural heritages that shape values and influence the role of business in the society. When defining the appropriate goals, attitude towards risks dealing with employees e.t.c., considerations must be given to the
8. cultural differences among/ across countries.

The Language Differences
Communication is critical in all businesses and to penetrate another market, the company need to have knowledge of language to communicate with managers,
9. workers and consumers.

Return Considerations
Domestically, competitive pressures may be such that only a normal rate of return can be earned. A firm may invest abroad so as to produce more efficiently due to
10. existence of cheaper factor of production.