Components Manufacturing Corporation (CMC) has an all-common-equity capital structure. It has 200,000 shares of Sh.2 par value common stock outstanding. When CMC‟s founder, who has also its research director and most successful inventor; retired unexpectedly to the South Pacific in late 2000, CMC was left suddenly and permanently with materially lower growth expectations and relatively few attractive new investment opportunities. Unfortunately, there was no way to replace the founder‟s contributions to the firm.
Previously, CMC found it necessary to plow back most of its earnings to finance growth, which averaged 12 percent per year. Future growth at a five percent rate is considered realistic, but that level would call for an increase in the dividend payout. Further, it now appears that new investment projects with at least the 14 percent rate of return required CMC‟s stockholders (ks= 14%) would amount to only Sh.800,000 for 2001in comparison to a projected Sh.2,000,000 of net income. If the existing 20 percent dividend payout were continued, retained earnings would be Sh.1.6 million in 2001, but as noted, investments that yield the 14 percent cost of capital would amount to only Sh.800,000.

The one encouraging thing is that the high earnings from existing assets are expected to continue, and net income of Sh.2 million is still expected for 2001. Given the dramatically changed circumstances, CMC‟s management is reviewing the firm‟s dividend policy.

(a) Assuming that the acceptable 2001 investment projects would be financed entirely earnings retained during the year, calculate DPS in 2001 if CMC follows the residual divided policy.

(b) What payout ratio does your answer to part a imply for 2001?

(c) If a 60 percent payout ratio is maintained for the foreseeable future, what is your estimate of the present market price of the common stock? How does this compare with the market price that should have prevailed under the assumptions existing just before the news about the founder‟s retirement? If the two values of P0 are different, comment on why.

(d) What would happen to the price of the stock if the old 20 percent payout were continued? Assume that if this payout is maintained, the average rate of return on the retained earnings will fall to 7.5 percent and the new growth rate will be 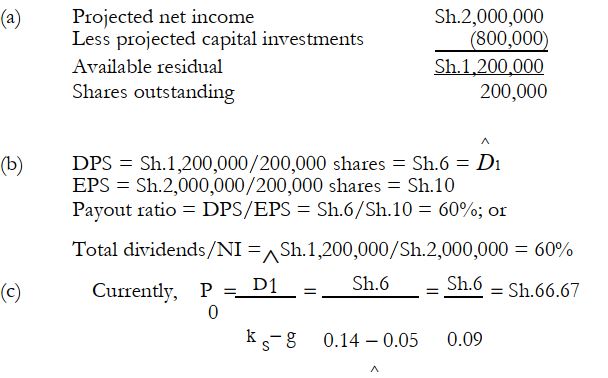 Although CMC has suffered a severe setback, its existing assets will continue to provide a good income stream. More of these earnings should now be passed on to the shareholders, as the slowed internal growth has reduce the need for funds. However, the net result is a 33 percent decrease in the value of the shares.

(d) If the payout ratio were continued at 20 percent, even after internal investment opportunities had declined, the price of the stock would drop to Sh.2/(0.14 – 0.06) = Sh.25 rather than to sh.66.67. Thus, an increase in the dividend payout is consistent with maximizing shareholder wealth.

Because of the downward-sloping IOS curve, the greater the firm‟s level of investment, the lower the average ROE. Thus, the more money CMC retains and invests, the lower its average ROE will be. We can determine the average ROE under different conditions as follows:

This suggests that the new payout is appropriate and that the firm is taking on investments down to the point at which marginal returns are equal to the cost of capital.