The managing director of Wemere, a medium -sized private company, wishes to improve the company‟s investment decision-making process using discounted cash flow techniques. He is disappointed to learn that estimates of a company‟s cost of capital usually require information on share prices which, for a private company, are not available. His deputy suggests that the cost of equity can be estimated using data for Folten Ltd., a similar sized company in the same industry whose shares are listed on the SE, and he has produced two suggested discount rates for use in Wemere‟s future investment appraisal. Both of these estimates are in excess of 17% per year which the managing director believes to be very high, especially as the company has just agreed a fixed rate bank loan at 13% per year to finance a small expansion of existing operations. He has checked the calculations, which are numerically correct, but wonders if there are any errors of principle.

Data have been purchased from a leading business school:

This rate must be adjusted to include inflation at the current level of 6%. The recommended discount rate is 32.4%.

When inflation is included the discount rate is 17.01%.
Other financial information on the two companies is presented below:

(2) Wemere‟s board of directors has recently rejected a take-over bid of Sh.10.6 million.

(a) to explain any errors of principle that have been made in two estimates of the cost of capital and produce revised estimates using both of the methods.

State clearly any assumptions that you make.
(b) to discuss which of your revised estimates Wemere should use as the discount rate for capital investment appraisal.
ANSWER
Tutorial note: when the examiner refers to „cost of capital‟ he is referring to the overall or weighted average cost of capital.)

(a) The first error made is to suggest using the cost of equity, whether estimated via the dividend valuation model or the capital asset pricing model (CAPM) as the discount rate. The company should use its overall cost of capital, which would normally be a weighted average of the cost of equity and the cost of debt.

Errors specific to CAPM
(i) The formula is wrong. It wrongly includes the market return twice. It should be:

Errors specific to the dividend valuation model
(i) The formula is wrong. It should be:

(ii) Treatment of inflation – as for CAPM.

(iii) Again the impact of the difference in the level of gearing of Wemere and Folten on the cost of equity has not been taken into account (to do so would require Modigliani and Miller‟s theory of capital structure which the examiner would specifically mention if it is to be used).

Revised estimates of cost of capital 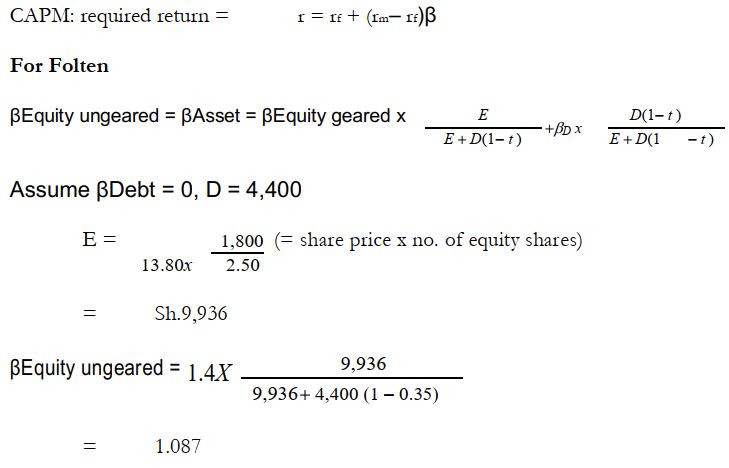 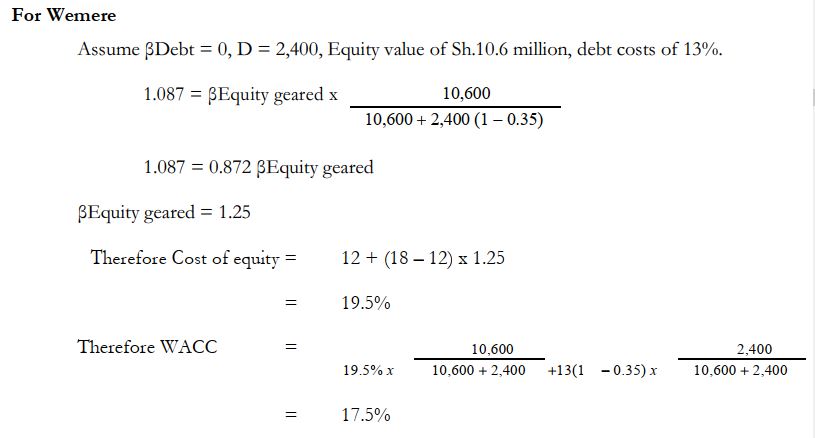 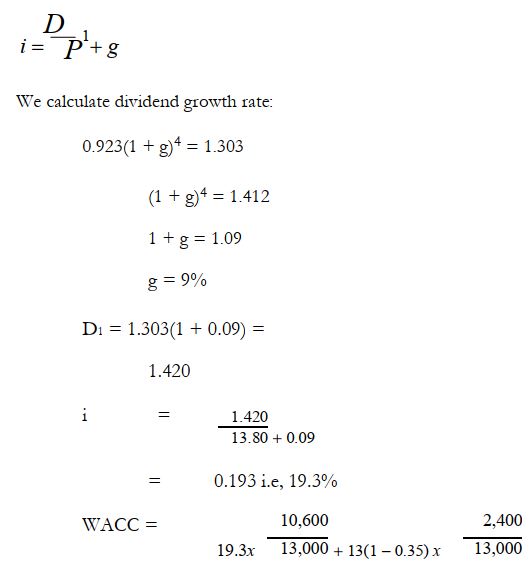 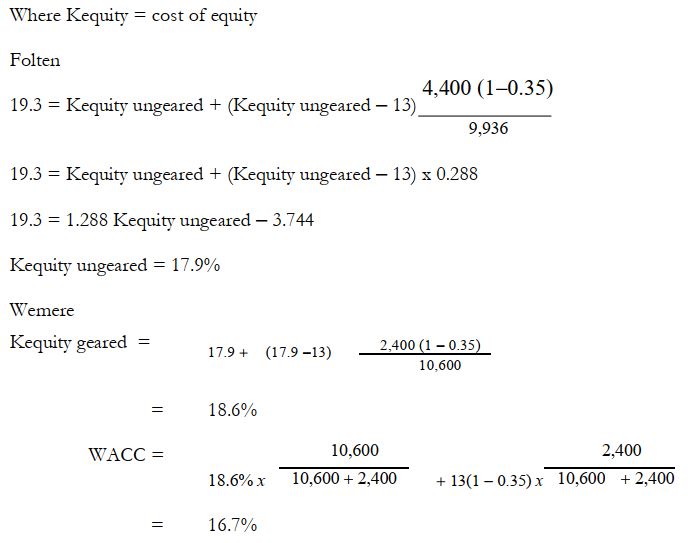 i.e, this reflects the lower level of gearing in Wemere.

(b) Both methods result in a discount rate of approximately 17.5%. They are both based on estimates from another company which has, for example, a different level of gearing. The cost of equity derived using the dividend valuation model is based on Folten‟s dividend policy and share price and not that of Wemere. The dividend policy of Wemere (e.g. the dividend growth rate) is likely to be different.

CAPM involves estimating the systematic risk of Wemere using Folten. The beta of Folten is likely to be a reasonable estimate, subject to gearing, of the beta of Wemere.

CAPM is therefore likely to produce the better estimate of the discount rate to use. However, this will be incorrect if the projects being appraised have a different level of systematic risk to the average risk of Folten‟s existing projects or if the finance used for the project significantly changes the capital structure of Wemere.

– Use of DCF
– Discounted payback
– Usefulness for small unlisted companies)

Discounted cash flow techniques allow for the time value of money and should therefore be used for all investment appraisal including that carried out small unlisted companies. It is important for all managers to recognize that money received now is worth more than money received in the future. Discounting enables future cash flows to be expressed in terms of present value and for net present value to be calculated. A positive net present value indicates that the return provided the project is greater than the discount rate.

One non-discounting method – accounting rate of return – is used because it employs data consistent with financial accounts, but it is not theoretically sound and is not recommended as a final decision arbiter.

Nevertheless it registers appreciation of the impact of a new project on the financial statements and thus likely impact on users of these statements.