Karim plc and Roshan plc are quoted companies. The following figures are from their current balance sheets

Roshan Ltd. has just made annual dividend and interest payments both on its ordinary shares and on its debentures. The current market value of the ordinary shares is Sh.1.40 per share and of the debentures, Sh.50.00 percent.

(a) to estimate the cost of ordinary share capital and the weighted average cost of capital of Karim Ltd and Roshan Ltd;

(b) to explain briefly why both the cost of ordinary share capital and weighted average cost of capital of Karim Ltd differ from those of Roshan Ltd;

(d) to prepare calculations to demonstrate to Mr. Hashim how he might improve his position in the way he has suggested, stating clearly any reservations you have about the scheme; and

(d) to discuss the implications of your answers to (a), (b) and (c) above for the determination of a
company‟s optimal financial structure in practice.
ANSWER
(Tutorial note: this question requires a demonstration of the arbitrage process. In part (d) a brief overview of the weakness of the M and M no tax position must be given.)
(a) Cost of capital
(i) Karim plc 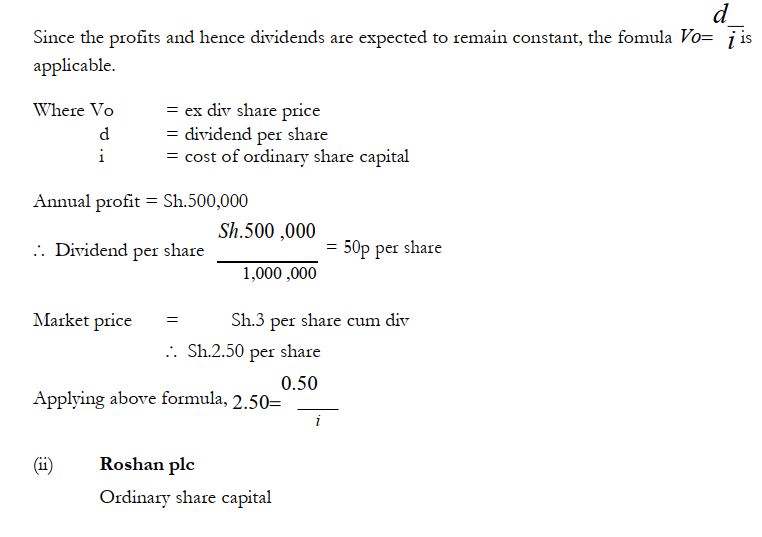 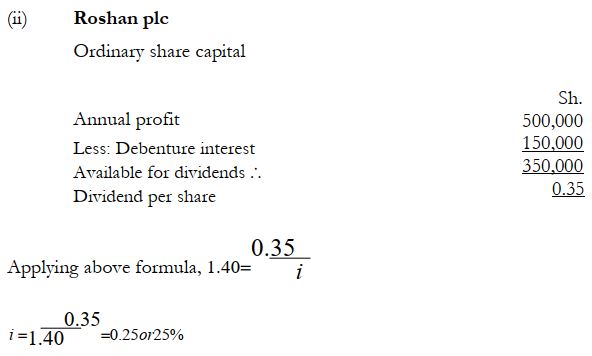 From the data given the difference in the cost of ordinary share capital must be easily explained in terms of the different gearing of the two companies. The effect of the high gearing of Roshan plc is to increase the level of financial risk and, therefore, decreased relative attractiveness of the ordinary shares.

This may be explained in terms of the objectives with which investors acquire and ordinary shares. In the first place investors will seek to maximize their return. However at the same time investors are in general averse to risk and, therefore, will seek to minimize the uncertainty of the variance of the returns about their expected values.

In any business investment there must be an element of business risk. The effect of a company using borrowing to increase its financial gearing is to magnify the effect of such business risk. This is because of the fixed nature of interest charges, which must be borne irrespective of the level of profitability and which, leaves a smaller margin of equity investment to carry the same absolute levels of variation in return.

Because, as indicated above, investors are averse to such uncertainty, they will demand a higher rate of return to compensate them for the higher level of uncertainty. This clearly explains why the cost of equity of Roshan plc, (25%) is higher than that of Karim plc, (20%).

However, two American writers, Modigliani and Miller have taken this a stage further and used a quantitative analysis to suggest that the relationship between the increasing costs of equity and the benefits of introducing cheaper debt finance must exactly cancel each other out (in the absence of taxation). The mechanism which this takes place is known as the arbitrage process and is, indeed, described in the example below. This being so, the difference in the weighted average cost of capital of the two companies must be explained in one of three ways:

(i) The situation is an unstable one which will be rectified investors carrying out arbitrage operations so as to take advantage of the gains which are available to them.

The data given does not coincide with investors‟ evaluations of the two companies and they are not, in fact, seen as identical (for example their respective earnings are subject to differing degrees of business risk).

The basic assumptions in the Modigliani-Miller hypothesis are not valid, and the data reflects their invalidity.

Any one of these three would provide an explanation. Despite a number of studies, the difficulty of evaluating data means there is as yet no conclusive evidence on the validity of the Modigliani -Miller hypothesis.

Market value of holding 50,000 x Sh 1.40 = Sh 70,000 Amount to be borrowed
Mr Hashim‟s level of risk will be unchanged if he employs personal gearing to the same extent as
Rohan plc i.e, so that debt is 47.2% of total capital or so that debt and own funds are in the ratio 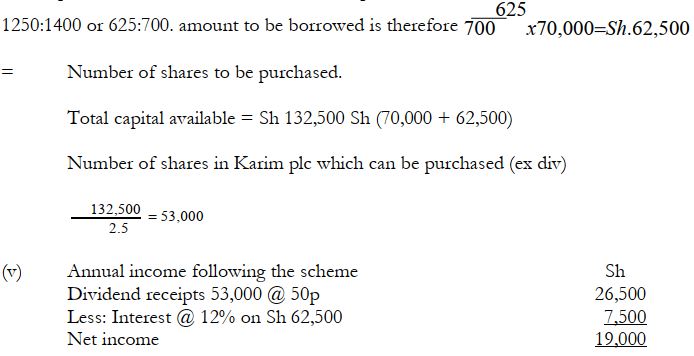 Mr Hashim‟s annual income would therefore increase £1,500 or 8.5% as a result of the scheme.

Mr Hashim may find it difficult to borrow such a large sum unless he provides additional
security. The cost may well be greater than the company‟s borrowing rate.

Other investors may see the possibility of providing additional income the same process thus increasing the share price of Karim. Mr. Hashim may therefore be required to pay the higher price thus reducing his anticipated increase.

Transaction costs have been ignored.

(d) Implications for the determination of the company‟s optimum financial structure.
In the absence of taxation the Modigliani-Miller thesis suggests that the company should be indifferent as between differing capital structures. 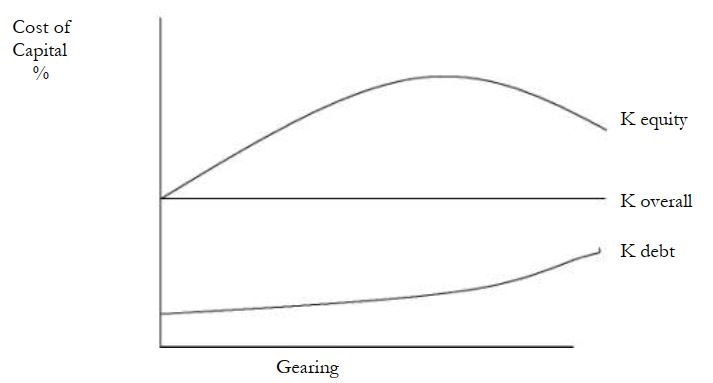 This view changes dramatically if we introduce the effects of taxation. If the Modigliani-Miller view is still accepted, then the cost of capital will decline at a gradient which is equal to the marginal rate of tax saving on the debt finance being introduced.

The Modigliani-Miller view conflicts with the traditional view, which suggested that the judicious use of debt finance could, in fact, lower the weighted average cost of capital so that a company could achieve an optimal financing structure, even without considering the effects of taxation. 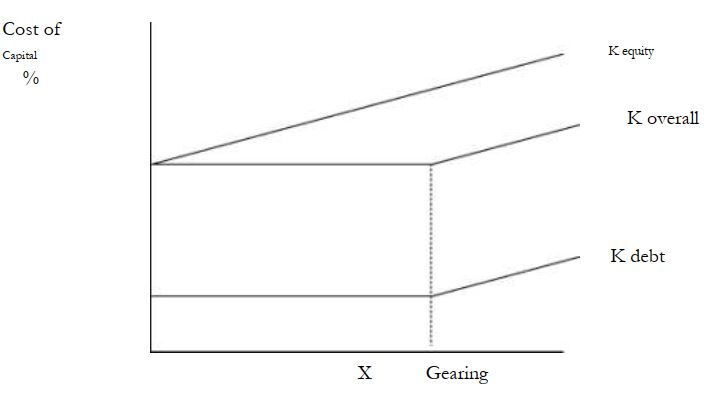 There is no doubt that given their assumptions the Modigliani-Miller analysis is correct. The question, therefore, lies in terms of the assumptions. These may be summarized as follows:

(i) Company shares are traded in an efficient market. This means that if an opportunity arises for investors to improve their position without increasing their risk, they will recognize and take such opportunities. The level of transaction costs is so low as to be immaterial

In practice, there is considerable doubt as to whether the securities market is a sufficient approximation to an efficient market for such a process to work with any degree of reliability.

The thesis also presumes that investors can borrow and lend at the same interest rates as companies. This is unlikely for private investors who must operate at a disadvantage as against major corporate investors. This is emphasized within the UK the legal structure and the difficulty of providing security on individual borrowings. On the other hand, in practice a significant proportion of investors are themselves institutional in nature and for these investors borrowing rates are likely to be similar to those of the companies in which they invest.

At high levels of gearing the cost of borrowed funds for the company is itself likely to start rising as the level of risk for lenders significant. In order to maintain the hypothesis of a constant weighted average cost of capital, Modigliani-Miller introduced the idea of „risk-seeking‟ investors who would be attracted the high levels of financial leverage, and would enter the market to buy shares in highly geared companies, therelowering the cost of equity. There is no evidence to support this view, which seems highly improbable. However, it is not of great practical significance as most companies do not operate at the high levels of gearing where this would become important.

The analysis also assumes that personal taxes have no distorting impact upon returns to the investor. In practice many investors find that debt income is taxable at higher rates than equity income and this could make them reluctant to allow firms to take high levels of gearing. In this situation we would need to the corporation tax savings to the firm with the personal tax losses to its investors.

As indicated above the evidence on the validity of the Modigliani-Miller view is inconclusive. However, under either view in the presence of taxation there must be substantial advantages for companies introducing some elements of debt financing. The only question is the extent to which debt finance should be used. This is clearly made higher if the Modigliani-Miller view, rather than the traditional view, is acceptable. However, in practice the parameters are likely to be set other factors, in particular, the attitude of the business managers to the uncertainty of running a highly geared company and putting their own jobs at risk. Therefore, although a theoretical conclusion may be elusive, a practical conclusion is to hand. This is that companies should borrow significant proportion of their financing requirements, and that the limitation is likely be put the attitude to risk of the managers, rather than the investors of whose being they are purportedly acting.