During the final stage of the first audit of Nairobi National Bank Ltd. You request the client to provide you with a letter of representation. The Client reads representations you are requesting and refuses to furnish the letter. The client states its position to be as follows:-

―You are asking us to tell you all manner of things which we appointed you to find out. You are requesting us to say such things as ‗all the transactions undertaken the bank have been

properly reflected in the accounting records‘ and yet we pay you to carry out the audit. You should know whether these statements are true or not‖.

In addition the letter of representation will serve the following functions:-

 It reminds the directors of their duties concerning the financial statements. In the letter the directors acknowledge their responsibility for their preparation of the financial statements event though the auditor may have assisted in this area.
 It provides the auditor with a further source of audit evidence to corroborate other information obtained.

Example of a letter of representation

Set out below is an example of a letter of representation, which relates to matters, which are material to financial statements and to circumstances where the auditor cannot obtain independent corroborative evidence and could not reasonably expect it to be available. It is not intended to be a standard letter because representations management can be expected to vary not only from one enterprise to another but also from one year to another in the case of the same client. 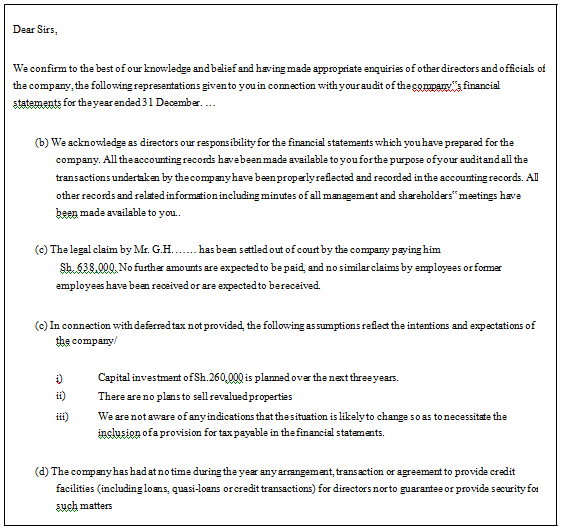 The letter of representation is considered reliable audit evidence because:-

It provides written confirmation of managements representation. It therefore has more credibility than oral evidence especially in instances where the management representations in the letter appear reasonable and consistent with other sources of audit evidence.

The reliability if the evidence will also depend on whether the individuals making the representations can be expected to be informed on the matter.

If management disagrees with the auditor‘s statement of representation, discussions should be held to clarify the matters in doubt and if necessary a revised statement prepared and agreed. Should management fail to reply the auditor should follow the matter up to try to ensure that his understanding of the position as set out in his statement is correct.

In rare circumstances the auditor may be completely unable to obtain written representations, which he requires. E.g. because of refusal management to co- operate, or because management properly declines to give representations required on the grounds of its own uncertainty regarding that particular issue. In such circumstances the auditor may have to conclude that he has not received all the information and explanations required and consequently may need to consider qualifying his audit report on the grounds of limitation in the scope of the audit.