Law may be classified as:
1. Written and Unwritten.
2. Municipal (National) and International.
3. Public and Private.
4. Substantive and Procedural.
5. Criminal and Civil.

Written law
This is codified law. These are rules that have been reduced to writing i.e. are contained in a formal document e.g. the Constitution of Kenya, Acts of Parliament, Delegated Legislation, International treaties etc.
Unwritten law
These are rules of law that are not contained in any formal document.
The existence of such rules must be proved. E.g. African Customary law, Islamic law, Common law, Equity, Case law e.t.c
Written law prevails over unwritten law.
Municipal/ national law
This refers to rules of law that are applicable within a particular country or state. This is state law.
It regulates the relations between citizens inter se (amongst themselves) as well as between the citizens and the state.
It originates from parliament, customary and religious practices.
International law
This is a body of rules that generally regulates the relations between countries or states and other international persons e.g. United Nations.
It originates from international treaties or conventions, general principles and customary practices of states.
Public law
It consists of those fields or branches of law in which the state has a direct interest as the sovereign.
It is concerned with the Constitution and functions of the various organizations of government including local authorities, their relations with each other and the citizenry. Public law includes:
• Criminal Law
• Constitutional Law
• Administrative Law
Public Law asserts state sovereignty.
Private law
It consists of those branches of law in which the state has no direct interests as the state sovereign.
It is concerned with the legal relationships between persons in ordinary transaction e.g.
• Law of contract
• Law of property
• Law of succession
• Law of marriage
• Law of torts

Procedural law
This is adjectival law. It consists of the steps or guiding principles or rules of practice to be complied with in the administration of justice or in the application of substantive law. For example:
• The Civil Procedure Code
• The Criminal Procedure Code

Criminal law
This is the law of crimes. A crime is an act or mission committed or omitted in violation of public law e.g. murder, treason, theft, e.t.c. All crimes are created parliament through statutes
A person who is alleged to have committed a crime is referred to as a suspect.
As a general rule, suspects are arrested the state through the police at the instigation of the complainant. After the arrest, the suspect is charged in an independent and impartial court of law whereupon he becomes the accused.
Criminal cases are generally prosecuted the state through the office of the Attorney General (AG) hence they are framed as R (the State) Vs Accused E.g. R v Kamenchu
Under the Constitution, an accused person is presumed innocent until proven or pleads guilty.
If the accused pleads not guilty, it is the duty of the prosecution to prove its case against him adducing evidence i.e. the burden of proof in criminal cases is borne the prosecution.
The standard of proof is beyond any reasonable doubt i.e. the court must be convinced that the accused committed the offence as charged.
In the event of reasonable doubt, the accused is acquitted. If the prosecution proves its case i.e. discharges the burden of proof, then the accused is convicted and sentenced.
The sentence may take the form of:-
1. Imprisonment
2. Fine
3. Probation
4. Corporal punishment
5. Capital punishment
6. Community service
7. Conditional or unconditional discharge
Under the Constitution, a person cannot be held guilty of an act or omission which was not a criminal offence on the date of omission or commission.

Civil law
It is concerned with the rights and duties of persons i.e. individuals and corporations. Branches of civil law include:-
• Law of contract
• Law of torts
• Law of property
• Law of marriage
• Law of succession
When a person’s civil or private rights are violated, he is said to have a cause of action. Examples of causes of action:
• Breach of contract
• Defamation
• Assault
• Negligence
• Trespass to goods e.t.c
Causes of action are created parliament through statutes as well as the common law and equity.
The violation of a person’s civil rights precipitates a civil case or action. The person whose rights are allegedly violated sues the alleged wrongdoer hence civil cases are framed as Plaintiff v Defendant.
It is the duty of the plaintiff to prove his allegations against the defendant. This means that the burden of proof is borne the plaintiff. The standard of proof in civil cases is on a balance of probabilities or on a preponderance of probabilities i.e. the court must be satisfied that it is more probable than improbable than the plaintiff’s allegations are true.
If the plaintiff proves his allegations evidence, he wins the case and is awarded judgment which may take the form of:-
1. Damages (monetary compensation)
2. Injunction
3. Specific performance
4. Account
5. Tracing
6. Winding up a company
7. Appointment of receiver 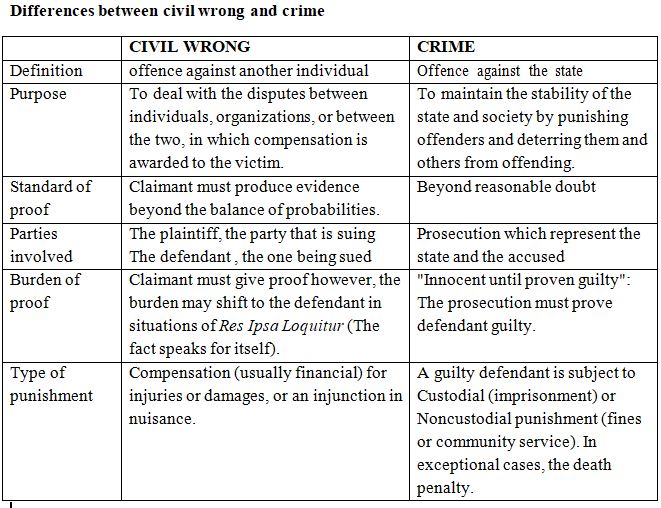 The rule of law
The concept of the Rule of Law is a framework developed Dicey on the basis of the English Legal system. It is also described as the due process.
According to Dicey, rule of law comprises three distinct conceptions namely:
1. Absolute supremacy or predominance of regular law: this means that all acts of The State are governed law. It means that a person can only be punished for disobedience of the law and nothing else.

2. Equality before the law: this means equal subjection of all persons before the law. It means that no person is exempted from obeying the law. All classes of persons are subjected to the same judicial process regardless of their age, sex, creed, gender or race.

3. The law (Constitution) is a consequence and not the source of rights: means that the law is a manifestation of the will of the people.