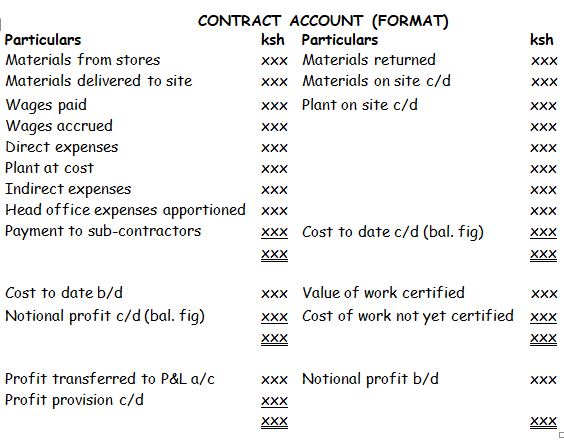 Introduction
Contract costing is a costing technique which is applied in accumulating the cost of large scale jobs. It is also called terminal costing.

Characteristics of contract costing
 There is a high proportion of direct cost since almost all the cost incurred arise due to the particular work being done.
 The contract may continue for more than one accounting period leading to technicalities in profit recognition
 The contract price is normally estimated in advance of the work
 The work is executed in the premises of the contractee
 The work to be executed depends upon customer specification. Hence very rarely two contracts resemble one another
 Progress payments are made depending on the stage of completion of the work
 Each contract is treated as a cost unit

Differences between contract costing and job costing
 A job is small in size whereas a contract is big in size
 Work under job costing is performed in the premises of the manufacturer. In contract costing, the work is done in the premises of the customer
 A job usually takes less time to complete compared to a contract
 The sales value of a job is paid after the job is completed fully. Under contract costing, progress payments are made depending on which stage the work has reached
 Expenses under job costing take the form of direct and indirect whereas under contract costing, most of the expenses are direct in nature
 Profit earned on a job is entirely taken to the profit and loss account whereas for incomplete contracts, only a portion of the profit is taken to the profit and loss account

The general position is that profit should be recognized in respect of work certified only.

The degree of completion
This is determined using any of the following formulae:

1 of the notional profit
3 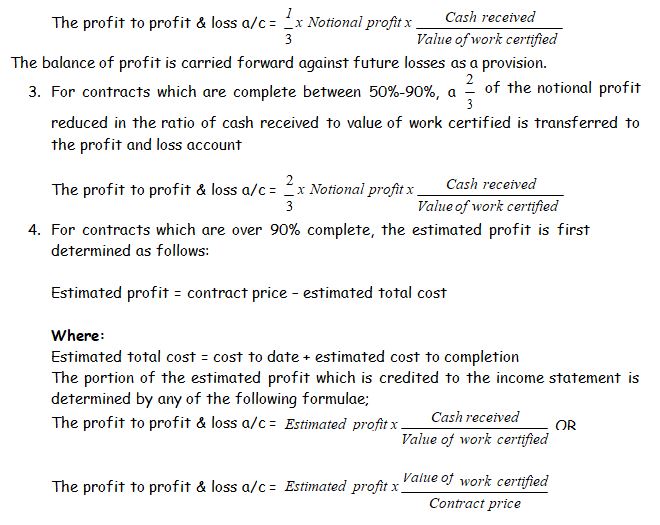 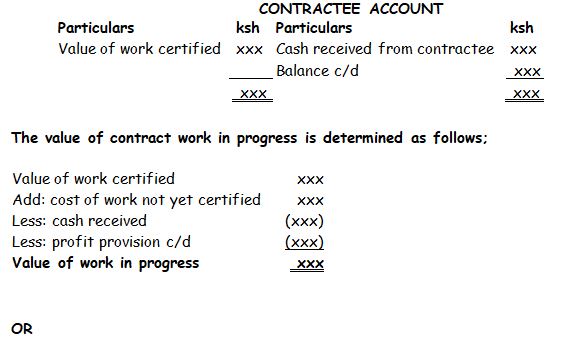 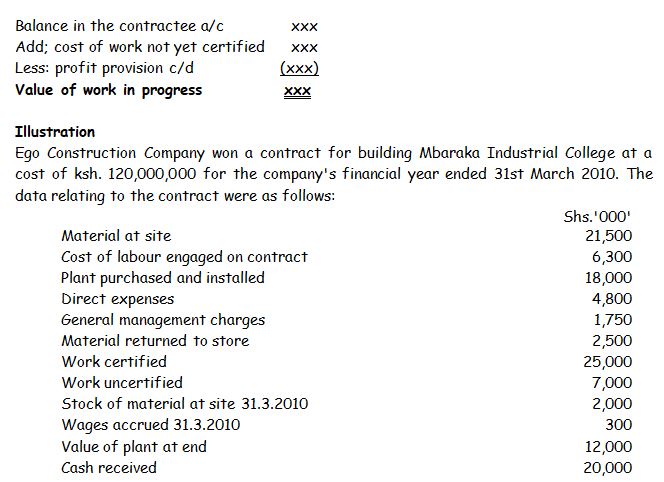 Activity
Big Ones Ltd. has undertaken to perform a contract for Small Things Ltd. The contract started on 1 April 2010. Costs to 31 December 2010, Big Ones Ltd‟s year end, can be ascertained from the following information.

As at 31 December 2010, certificates had been issued for work valued at ksh. 60,000 and Small Things Ltd had made progress payments of ksh.53,000. Big Ones Ltd has calculated that they have performed more work since the last certificate was issued, the cost of this work done but not yet certified being ksh.10,000.

The contract is 80% complete and so Big Ones Ltd takes three quarters of notional profit to the profit and loss account as the profit earned on the contract for the nine months to 31 December 2010.