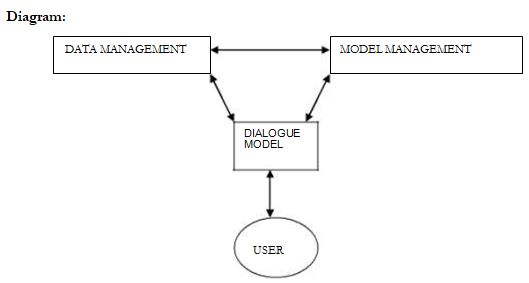 The dialogue model is basically a user interface at which the user enters data into the system or views data from the system.

The data management component consists of current or historical data from a number of applications or groups. It may be in the form of a small database residing on a PC that contains a subset of corporate data that has been downloaded and possibly combined with external data. Alternatively, the DSS database may be a massive data warehouse that is continuously updated major organizational transaction processing systems (including enterprise systems and data generated website transactions). The data in DSS databases are generally extracts or copies of production databases so that using the DSS does not interfere with critical operational systems.