Rafiki Hardware Tools Company Limited sells plumbing fixtures on terms of 2/10 net 30. Its financial statements for the last three years are as follows: 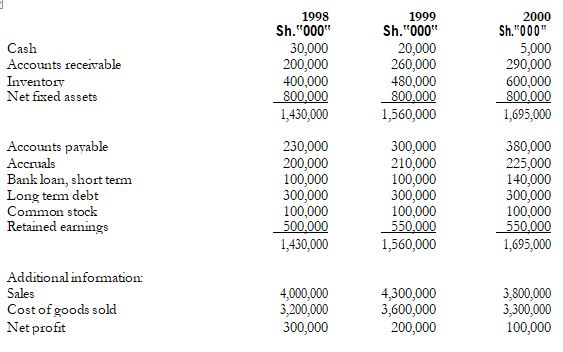 (b) From the ratios calculated above, comment on the liquidity, profitability and gearing positions of the company. (8 marks) 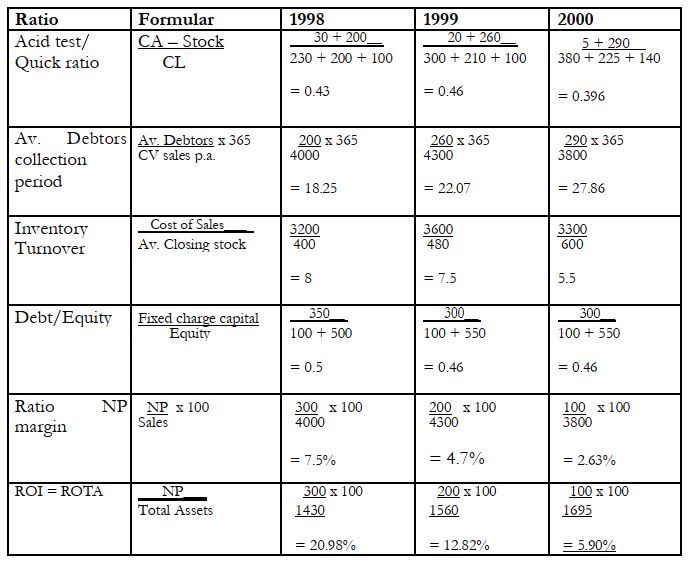 Note:
(i) All sales are on credit since they are made on terms of 2/10 net 30 i.e pay within 10 days and get a 2% discount or take 30 days to pay without getting any discount.
(ii) Debtors = Account Receivable while ordinary share capital = common stock.
(iii) Current Asset – Stock = Cash + Accounts receivable

Comment on liquidity position:
– This is shown acid test/quick ratio
– The ratio improved slightly in 1999 but declined in year 2000.
– The ratio is lower than the acceptable level of 1.0

This is due to poor working capital management policy as indicated increasing current liabilities while cash is consistently declining.

– The firms ability to meet its set financial obligations is poor due to a very low quick ratio.

Comment on profitability position:
– This is shown net profit margin and return on total assets.
– Both ratios are declining over time
– This is particularly due to decline in net profits thus decline in the net profit margin and increase in total accounts as net profit decline thus reduction in ROTA.
– The firm‟s ability to control its cost of sales and other operating expenses is declining over time e.g Sales – Net profit will indicate the total costs.
These costs as a percentage of sales are as follows:

Generally the firm has financed most of its assets with either short term or long term debt i.e current liabilities + long term debt

Example: the total liabilities (long term debt + Current liabilities) as a percentage of total assets are as follows: