Magharibi Cane Millers Ltd. is a company engaged in the pressing and processing of sugar cane juice into refined sugar. For some time, the company has been considering the replacement of its three existing machines.

The production manager has learnt from a professional newsletter on sugar of the availability of a new and larger machine whose capacity is such that it can produce the same level of output per annum currently produced the three machines. Furthermore, the new machine would cut down on the wastage of juice during processing. If the old machines are not replaced, an extraordinary overhaul would be immediately necessary in order to maintain them in operational condition. This overhaul would at present cost Sh.5,000,000 in total.

The following additional information is available:

1. The old machines were purchased 5 years ago and are being depreciated over 15 years on a straight line basis, with an estimated final scrap value of Sh.600,000 each. The current second hand market value of each of the machines is Sh.1,000,000.

2. The annual operating costs for each of the existing machines are:

3. The new machine has an estimated life of ten years and its initial cost will comprise:

4. The estimated annual operating costs, if all the current output is processed on the new machine are:

6. For a project to be implemented, it must pass both the profitability test, as indicated its internal rate of return and also satisfy a financial viability test, in that it must pay back for itself within a maximum period of five years.

Required:
(a) (i)Net present values of the proposed replacement decision using discount rates
of 10% and 20%.

(ii) The estimated internal rate of return (IRR) of the replacement decision using the values determined in (i) above.

(iii) Advice management on the proposal based on your answer in (ii) above.

(b) Decision as to whether the project meets the financial viability test.

(c) Comment on any other qualitative considerations that could influence this decision.

Note: If the new machine is acquired, the overhaul cost will not be incurred since existing machines will be disposed off. In the absence of tax rate, the firm will not generate any tax shield or will not pay additional tax from the disposal of the existing asset. 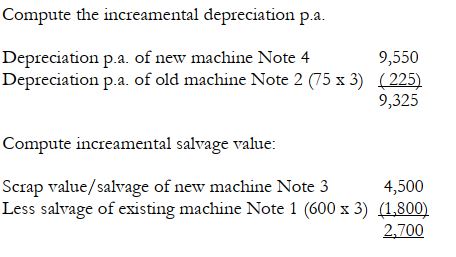 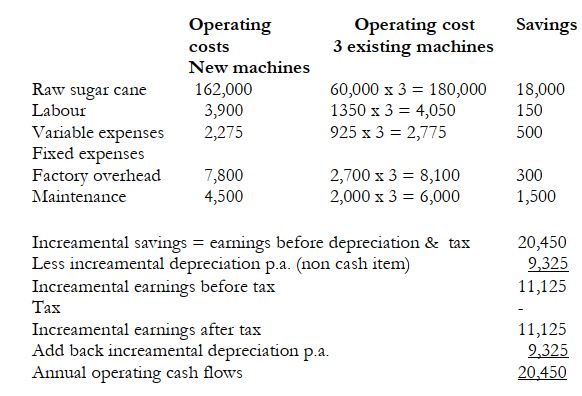 Note: If tax is ignored then annual operating cash flows = EBDT. The new machine has 10 years of economic life which the existing machines still have 10 years to go (they were bought 5 years ago and are being depreciated over a 15 year economic life. Therefore discount the cash flows and salvage value at 10% cost of capital and 20% as required using 10 year period. 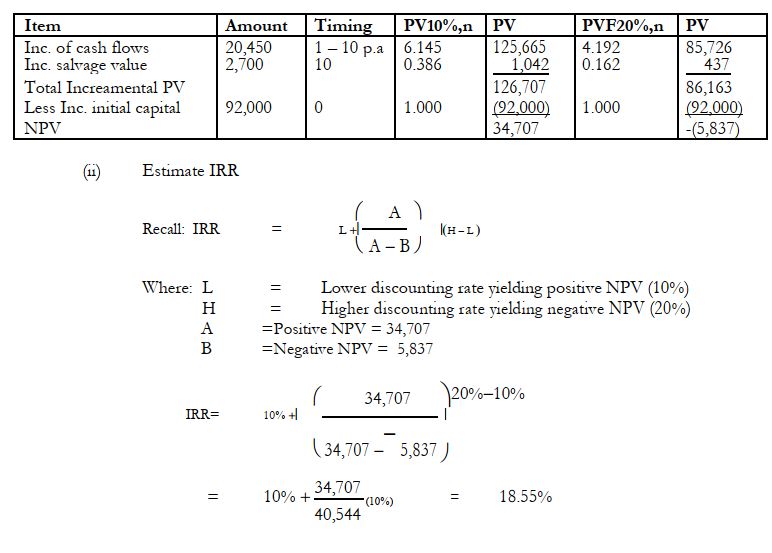 According to the financial viability test the profit payback period should not exceed 5 years. In presence of annuity cash flows, payback period:

(c) Qualitative considerations/factors that could influence the decision:
– availability of spare parts for the new machine
– changes in technology when the new machine is acquired
– possibility of stoppage of production if the new machine breaks down compared to the existing 3 machines where if 1 breaks down, production could continue with the other 2
– The effect of replacement declines on the morale of the … e.g the 4 new machine only one operator is required compared to 3 operators with the existing 3 machines, 2 operators will be laid off.
– The risk increased with the replacement decision e.g cash flows are likely to fluctuate over time and not constant as analysed above.