The total of the net working capital and fixed assets of Faida Ltd as at 30 April 2003 was Sh.100,000,000. The company wishes to raise additional funds to finance a project within the next one year in the following manner.

The following items make up the equity of the company:

The current market value of the company‟s ordinary shares is Sh.30. The expected dividend on ordinary shares 30 April 2004 is forecast at Sh.1.20 per share. The average growth rate in both earnings and dividends has been 10% over the last 10 years and this growth rate is expected to be maintained in the foreseeable future.

The debentures of the company have a face value of Sh.150. However, they currently sell for Sh.100. The debentures will mature in 100 years.

The preference shares were issued four years ago and still sell at their face value. Assume a tax rate of 30%
Required:
(i) The expected rate of return on ordinary shares. (2 marks)

(iv) The company‟s marginal cost of capital if it raised the additional Sh.50,000,000
as intended.
ANSWER
i). Expected rate return on ordinary shares is equal to cost of equity, ke Ke – 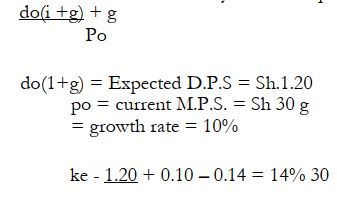