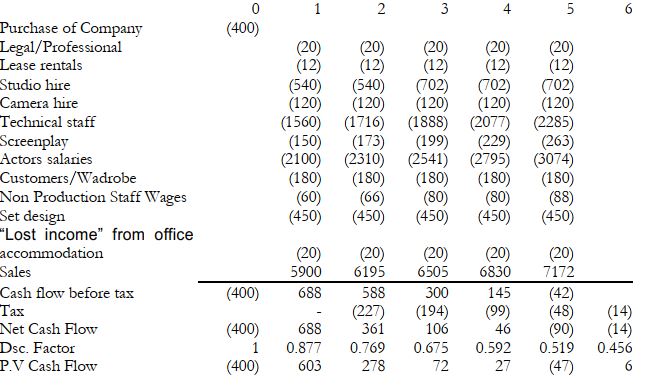 The Independent Film Company plc is a film company which purchases distribution rights on films from small independent producers, and sells the films on to cinema chains for national and international screening. In recent years the company has found it difficult to source sufficient films to maintain profitability. In response to the problem, the Independent Film Company has decided to invest in commissioning and producing films in its own right. In order to gain the expertise for this venture, the Independent Film Company is considering purchasing an existing film making concern, at a cost of Sh.400,000. The main difficult that is anticipated for the business is the increasing uncertainty as to the potential success/failure rate of independently produced films. Many cinema chains are adopting a policy of only buying films from large international film companies, as they believe that the market for independent films is very limited and specialist in nature. The Independent Film Company is prepared for the fact that they are likely to have more films that fail than that succeed, but believe that the proposed film production business will nonetheless be profitable.

Using data collection from the existing distribution business and discussions with industry experts, they have produced cost and revenue forecasts for the five years of operation of the proposed investment. The company aims to complete the production of three films per year. The after tax cost of capital for the company is estimated to be 14%.

Additional Information
(i) No capital allowances are available.
(ii) Tax is payable one year in arrears, at a rate of 33% and full use can be made of tax refunds as they fall due.
(iii) Staff wages (technical and non-production staff) and actors‟ salaries, are expected to rise 10% per annum.
(iv) Studio hire costs will be subject to an increase of 30% in Year 3.
(v) Screenplay costs per film are expected to rise 15% per annum due to a shortage of skilled writers.
(vi) The new business will occupy office accommodation which has to date been let out for an annual rent of Sh.20,000. Demand for such accommodation is buoyant and the company anticipates in finding future tenants at the same annual rent.
(vii) A market research survey into the potential for the film production business cost Sh.25,000.
Required:
Using DCF analysis, calculate the expected Net Present Value of the proposed investment.
(Workings should be rounded to the nearest Sh.‟000‟)
ANSWER
Cash flows Sh.‟000‟