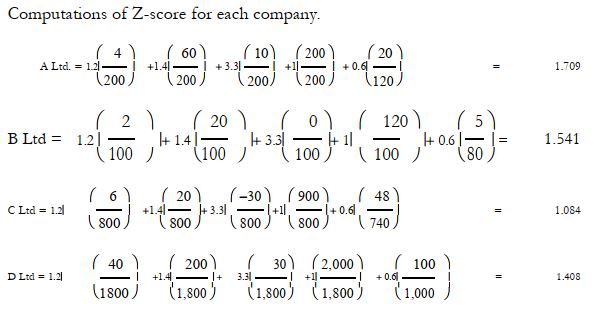 In this model, a Z-score of 2.7 or more indicates non-failure and a Z-score of 1.8 or less indicates failure.
You are provided with the following information in respect of four listed companies.

Required:
a) The Z-Score for each of the companies. Comment on the results obtained.
b) It has been suggested that other ratios ought to be incorporated into Altman‟s
bankruptcy prediction model. What is your opinion on this?
c) List the indicators of possible business failure.

All firms are at the blink of bankruptcy since their Z-score is less than 1.8. Company C has the lowest Z-score and company A the highest Z-score.

Ratios (i) and (ii) will indicate liquidity which ratio (iv) is vital for measuring gearing.