The following financial statements relate to the ABC Company:
Required: 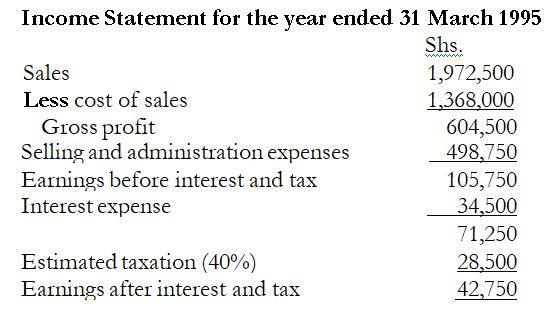 b) The ABC Company operates in an industry whose norms are as follows:

Required:
Comment on the revelation made the ratios you have computed in part (a) above when compared with the industry average. 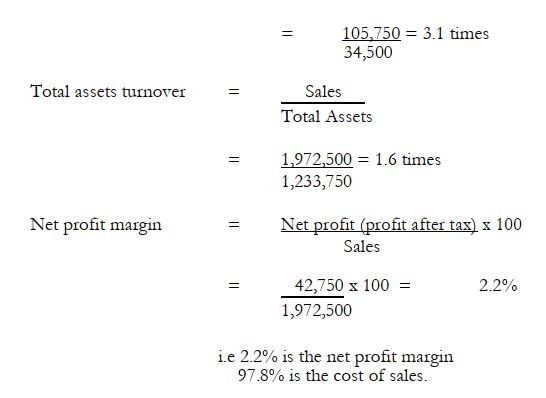 – Industrial analysis involve comparison of firm performance with the industrial average performance or norms.
– This analysis can only be carried out for a given year. i.e

Times series/trend analysis
– This involve analysis of the performance of a given firm over time i.e ratio of different year of a given Co. are compared in order to establish whether the performance is improving or declining and in case a weakness is detected e.g decline in liquidity ratio, this will force the management to take a corrective action.
– When commenting on industrial and trend analysis the following 4 critical points should be highlighted:

a) In case of individual ratio classify them in their immediate category e.g when commenting on TIER indicate this in a gearing ratio.

b) State the observation made e.g total asset turnover is declining or increasing over time (in case of trend analysis) or the ratio is lower or higher than the industrial norms (in case of industrial analysis).

c) State the reason for observation i.e. explain why the ratio is declining or increasing.

d) State the implication for observation e.g decline in liquidity ratio means that the ability of the firm to meet in short term financial obligation is declining over time.

i) Inventory turnover
– This is a turnover or efficiency ratio
– The rate is lower than industrial norm
– A low stock turnover could be attributed to:
i) Charging higher price than competition
ii) Maintenance of slow moving/obsolete goods
iii) Where the firm is selling strictly on cash while competitors are selling on credit.

– The firm is not efficiently utilizing its inventory to generate sales revenue.

ii) Times interest earned ratio (TIER)
– This is a gearing ratio
– It is lower than industrial average or norm
– This could be due to low operating profit due to high operating expenses or high interest charges due to high level of gearing/debt capital.
– This implies that the firm is using a relatively high level of fixed charge capital to finance the acquisition of assets.

iii) Total asset turnover
– This is efficiency ratio/activity
– Lower than industrial average
– This could be due to holding large non-operational or fully depreciated asset which are not utilized the firms.
– This implies inefficiency in utilization of total assets to generate sales revenue.

iv) Net profit margin
– Is a profitability ratio
– Lower than industrial norm
– This could be due to low level of net profit of the firm relative to sales revenue.
– This implies that the firm has a low ability to control its cost of sales, operating & financing expenses e.g in case of ABC Ltd selling & admin expenses are equal to 82.5% of gross profit