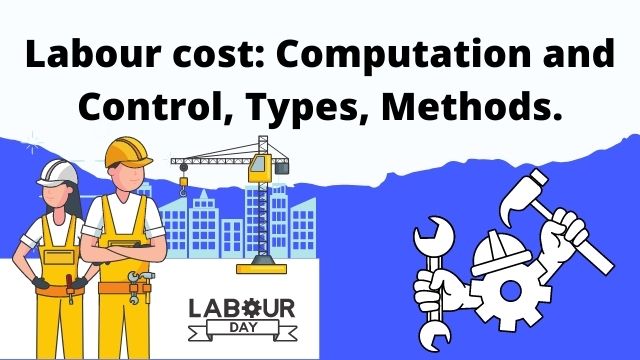 Labour costs represent the various items of expenditure incurred on workers the employer and would include the following:

Remuneration is a payment or compensation received an employee against the services provided him. This includes the basic salary, any bonus, allowances or other economic benefits that an employee or executives received during his employment.

Remuneration paid on the basis of time rate or piece rate basis. It is fixed in nature and is constant for every employee even if they doesn’t work as per standards. Remuneration is traditionally seen as the total income of an individual and may comprises a range of separate payments determined according to different rules.

Incentive is a monetary or non-monetary reward which is given to a worker for his efficiency and hard work. It is given to the workers when their actual production is more than the standard production. It is considered as a performance appraisal to the employee if he/she performs better than standard work in a way that benefits to the organization. It is variable in natures and change according to the efficiency of the workers. An incentive motivates and encourages a worker to produce more and better and help in increasing the interest of the worker in the production.

Both remuneration and incentive are labour cost. Sometimes, both the terms are used interchangeably but they are different from each other in following aspects:

An ideal incentive plan must possess the following features:

The success of an incentive plan depends on the mutual cooperation a understanding between employer and employees.

The methods of remuneration can be classified into:

a)      Time Rate System: In this system, a worker is paid on the basis of attendance for the day or according to the hours of the day, regardless of the output. This system is also known as time work, day work, day age rate or day rate. The wage rate of the day worker may be fixed on hourly, daily, weekly, fortnightly, or monthly basis depending on the practice followed in the concern. There are two variants of this system, each differing only in so far as the fixation of the time rate is concerned. They are:

Graduated Time Rate:      Under this method wages are paid at time rates which vary according to

It the cost of living goes up, the wages also go up proportionately, and vice versa. Thus the works get the real wages. Similarly, the workers having higher merit rating get higher wages, and the workers with lower rating get lower wages.

Differential Time Rate: Workers are paid rate accounting to their individual efficiency. They are paid normal rate upto a certain percentage of efficiency and the rate increases in steps for efficiency slabs beyond the standard. As the efficiency is measured in terms of output, this method does not fall strictly under the area of time rate system.

b)      Piece Rate System: The payment of wages under this system is based upon the out turn of the worker. The rate is fixed per piece of work and the worker is paid according to the pieces of work completed or the volume of work done him, irrespective of the time taken him in completing that work. A workman is free to earn as much as his ability, energy, or skill would allow to him to produce. The piece rate System can be classified into:

Straight Piece Rates: It is a simple method of making payment at a fixed rate per unit for the units manufactured. Earnings = Number of units X Rate per unit.

Merrick Differential Piece-rate: In the Taylor Method, the effect on the wages is quite sharp in the marginal cases. To remove this defect Merrick suggested three piece rates for a job as follows:

c)       Incentive Schemes: Under this heading, we study the following methods:

The Halsey premium plan: This system is known as fifty-fifty plan. It was introduced F.A. Halsey, an American engineer. Under this method a standard time is fixed for the performance of each job; worker is paid for actual time taken at an hourly rate plus 50% of time saved as bonus. Total wages under this scheme is calculated with the help of the following formula:

Principles/Features of Halsey Premium Scheme: Under this plan,

a)      Time rate is guaranteed and the worker gets the guaranteed irrespective of whether he completes the job within the time also takes more time to do it.

b)      Standard time and standard work are fixed for the job or operation in advance;

e)      Workers who fail to reach the prescribed standard get the time wages.

f)       Labour cost per unit of output decreases. The employer also shares the benefit of efficiency which induced him to improve the method and equipment.

The advantages and disadvantages of this premium plan are mentioned below:

(i) The plan is simple to understand and easy to operate.

(ii) It creates a feeling of security among workers as the plan assures a minimum hourly rate or guaranteed wage.

(iv) Earnings of workers increase and productivity increases since the workers are motivated.

(i) The workers do not get the full benefit of their efforts since the employee gets a share of the wages of the time saved.

(ii) More wastage of raw materials may result due to over-speeding.

(iii) The quality of work may decline as the workers want to rush through the work.

Rowan System or Rowan Plan: The scheme was introduced in 1901 David Rowan of Glasgow, England. The wages are calculated on the basis of hours worked where as the ‘bonus is that proportion of the wages of time taken which the time saved bears to the standard time allowed’. Total wages under this scheme is calculated with the help of the following formula:

The main principles/features of Rowan plan are:

a) Time rate is guaranteed and the worker gets the guaranteed irrespective of whether he completes the job within the time also takes more time to do it.

b) Standard time and standard work are fixed for the job or operation in advance;

d) Bonus is based on that proportion of the time wages which the time saved bears to the standard time.

e)  Workers who fail to reach the prescribed standard get the time wages.

f)  Labour cost per unit of output decreases. The employer also shares the benefit of efficiency which induced him to improve the method and equipment.

g) Wages per hour increases but in the same proportion as the output.

The advantages and disadvantages of Rowan plan are as follows:

(i) The plan assures a minimum hourly rate.

(ii) The quality of output is protected since the bonus declines after the worker has reached a given level of efficiency.

(i) The plan is not easily followed most of the workers.

(ii) Efficiency beyond certain point is not rewarded. It fails to distinguish between a very efficient worker and a worker with a little more than average efficiency.

(iii) Since the employer gets a share of the wages of the time saved, the workers do not get the full benefit of their efforts.