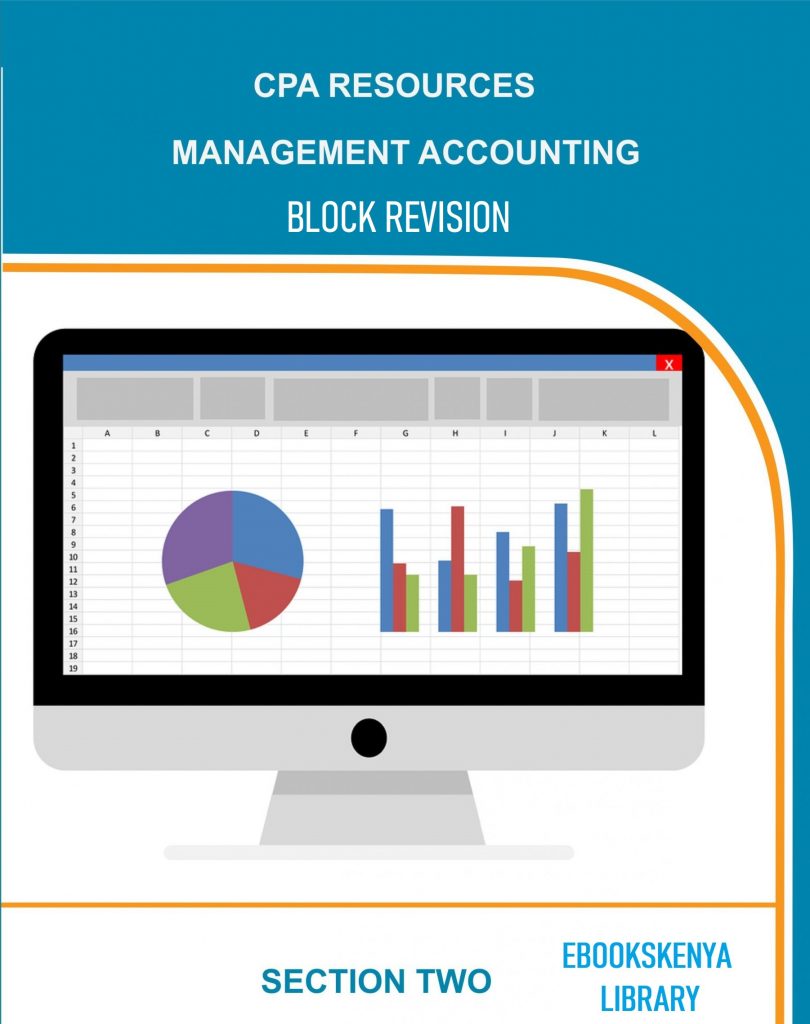 ACCOUNTING FOR LABOUR
Methods of labour remuneration
This can be classified into four:-
i) Time based system
ii) Performance/output base system
iii) Bonus schemes
iv) Profit sharing/co-ownership
Time based system
This is further subdivided into two
a) Basic system (flat rate)
Under this system workers are paid for the number of hours worked at the basic rate
e.g. 40 hours/week at Ksh 1,000/hrs.

The wages are calculated as follows:

Advantages of basic system:
 Simple to understand and administer
 It simplifies wage negotiations since only one rate needs to be determined
 The workers need not work in hurry and this guarantees quality.
 Remuneration is assured and therefore workers have a feeling of security.
Disadvantages of basic system:
 No real incentive to increase output
 Employees in the same grade are paid the same amount regardless of performance
 Constant supervision may be necessary

 The resultant decrease in production tends to increase the average cost per unit because of fewer units to which overheads are to be charged.

b) Highly day-rate system
Is a time based system designed to provide a strong incentive paying rates above the basic time rate in exchange for above average performance.

Advantages of highly day-rate system:
 It can attract higher grade workers
 It provides a direct incentive without the complications of individual piecework rates
 It‟s simple to understand and administer
 It requires less supervision since the performance targets are agreed on in advance
 The workers need not work in hurry and this guarantees quality.

Disadvantages of highly day-rate system
1. The highly day rate system may lead to competition i.e. raising the wage rate so as to attract higher grade workers which may eventually make labour cost be expensive in the entire industry.
2. Problems may occur when the original performance targets are not achieved

Areas where time based system is most appropriate
 Where the quality of work is more important than quantity e.g. in teaching, medicine manufacturing, safety considerations etc
 Where output cannot be measured in quantitative terms e.g. in the case of indirect work like the work of a watchman, teacher etc.
 Where output is beyond the control of a particular work e.g. in process industries where goods move from one person to another before obtaining the final output, in power stations etc.
 Where the worker is a learner or an apprentice.
Performance/output based system
This uses output obtained to determine the wages. There are two categiries of output based system
a) Straight piece work system
The work is paid an agreed rate/unit for all the number of units produced

The wage is computed as follows:
Wages = number of units produced x rate per unit

b) Differential piece work system
One objection to the straight piecework system is that the incentive effect at higher production levels declines because a flat rate per unit is paid throughout. Differential piecework seeks to overcome this motivating workers to increase output. The units produced are divided into classes/bands such that units at higher levels are paid at higher rates. The rates are increased progressively at various production levels. For example:
Up to 100 units – ksh. 10 per unit 100 – 150 units – ksh. 15 per unit
151 – 200 units – ksh. 20 per unit 201 – above units – ksh. 25 per unit

Advantages of performance/output system
 It benefits both the employee and employer i.e. the employee can earn higher incomes while the employer gets increased output.
 Boosts the morale of workers since extra effort is rewarded.
 Higher grade workers may be attracted due to the opportunity to earn higher wages.
 Minimal supervision is required.
Disadvantages
i) Complex and expensive to administer.
ii) Unskilled workers may earn as much as skilled workers leading to dissatisfaction among the skilled workers.
iii) There is the possibility of low quality output.
Bonus schemes
These schemes provide the basis for sharing the gains in labour efficiency between the employer and the employees.

Required;
Compute the bonus payable to the employees under each of the above methods. 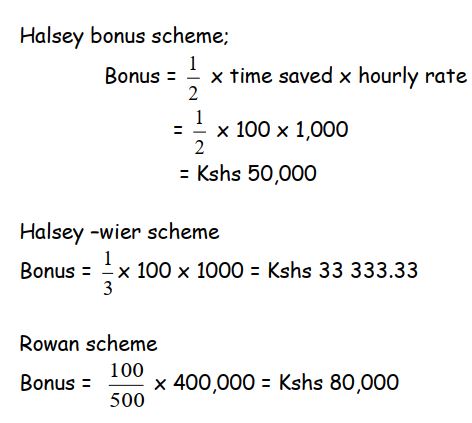 Note: Organizations have different policies regarding bonus and do not have to stick to any of the above methods

Profit sharing/co-ownership
This is where employees are encouraged to own shares in the company that they work for. It allows workers to take part in the dividends at the end of the year which gives them sufficient motivation to increase output so as to share the company‟s gross profit.

Factors influencing wages
 General economic climate of a particular industry.
 Government policy i.e. whether there is a minimum wage requirement or not.
 Profitability of the firm.
 Strength of the union.
 The supply of labour in the market.
 Strategic importance of the industry to the economy e.g. electricity supply
 Availability of workers with appropriate skills.
 The extent of danger and hazards at the work place.
 The rate of labour turnover (rate at which workers join and leave the organization).
 Wage rates prevailing locally and nationally
Labour turnover
This refers to the rate at which employees leave and new employees join a firm. It is normally expressed as a ratio as follows:

Causes of labour turnover
a) Unavoidable causes
i) Sickness, insanity, accident etc
ii) Movement of families from one locality to another.
iii) Marriage, pregnancy and difficulties in child care provision.
iv) Death.

Illustration
Rapid results limited manufactures 3 products; A, B and C. The company has 30 workers being paid under a group bonus scheme. There are 3 categories of employees who are paid bonus of the excess of time allowed over time taken. The bonus is computed at the rate of 75% of the employees‟ base rate and is shared among the direct workers in proportion to the time spent on the work. The relevant production details for the period under consideration are as follows:- 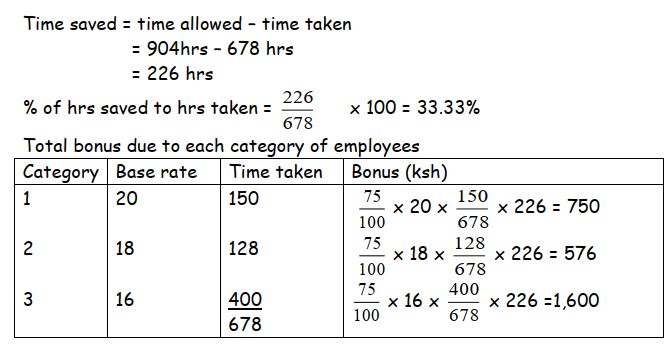 The total earnings due the group

Activity 1:
Ardhi Company Ltd is considering the type of remuneration scheme to adopt for its employees.

The following information is availed to you for your analysis:

For the calculation of piecework earnings the company values each minute at a rate of 50 cents.

Required:
Calculate the earnings for each employee using:
a) Basic guaranteed hourly rates.
b) Piecework rates.
c) Premium bonus, given that an employee earns the premium bonus at the rate of two thirds of the time saved.

Required:
For each operator, calculate:
i. The amount of bonus payable.
ii. The total gross wage payable.
iii. The wages cost per unit.