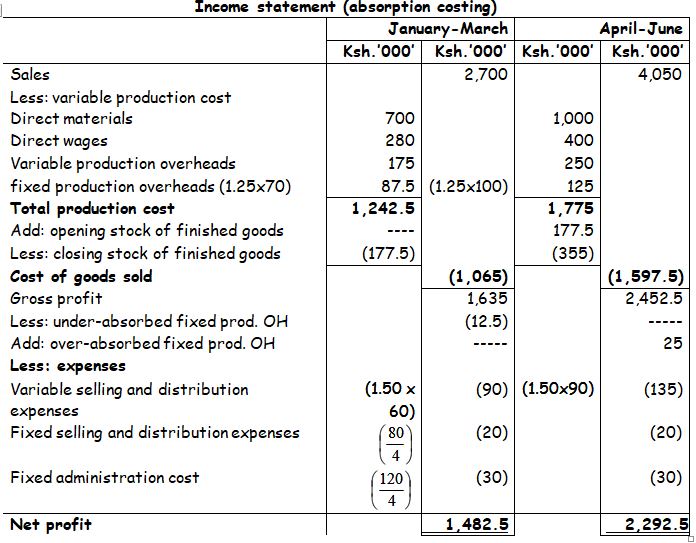 MARGINAL COSTING/DIRECT COSTING/VARIABLE COSTING
This is a costing technique in which only variable manufacturing costs are considered and used in valuing inventories and also in determining the cost of goods sold i.e. only variable production cost are considered as products cost and are allocated to the products manufactured. These costs include; direct material, direct labour, direct expenses and variable manufacturing overheads.

Fixed manufacturing overheads are not considered as product cost. Instead they are treated as period costs to be written off to the profit and loss account.

ABSORPTION COSTING/FULL COSTING/INDIRECT COSTING
All manufacturing costs (variable and fixed) are considered as cost of production and are used in determining the cost of goods manufactured and the value of inventories. Fixed manufacturing overheads are absorbed into the cost of finished goods.
Differences between marginal costing and absorption costing Cost elements included in production
They differ in the absorption of fixed production overheads. Selling and administration expenses, whether variable or fixed are treated as period costs and do not form part of product cost. Instead they are charged as expenses in the profit and loss account.
Inventory values
The value of inventories of finished goods under marginal costing is relatively low since inventory values are determined only on the basis of variable production cost. In absorption costing the value of inventories is comparatively high because it includes even fixed manufacturing overheads, as part of the product cost.

Net income
The treatment of fixed manufacturing Overheads brings about a difference in net profit figures in the two costing techniques only where there are inventories of finished goods. 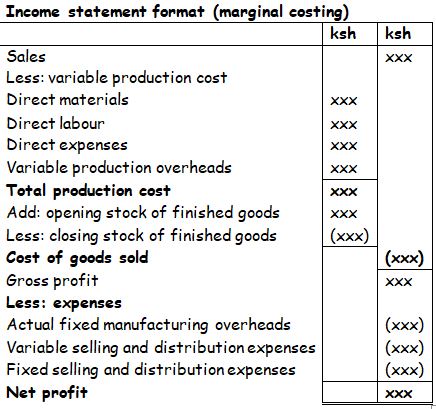 Illustration:
The following data have been extracted from the budgets and standard costs of ABC Limited, a company which manufactures and sells single product.

Fixed production overhead costs are budgeted at Sh.400,000 per annum. Normal production levels are thought to be 320,000 units per annum.

Budgeted selling and distribution costs are as follows:

The following patterns of sales and production are expected during the first six months of 2010.

Required:
Prepare profit statements for each of the two quarters, in a columnar format, using the following method: 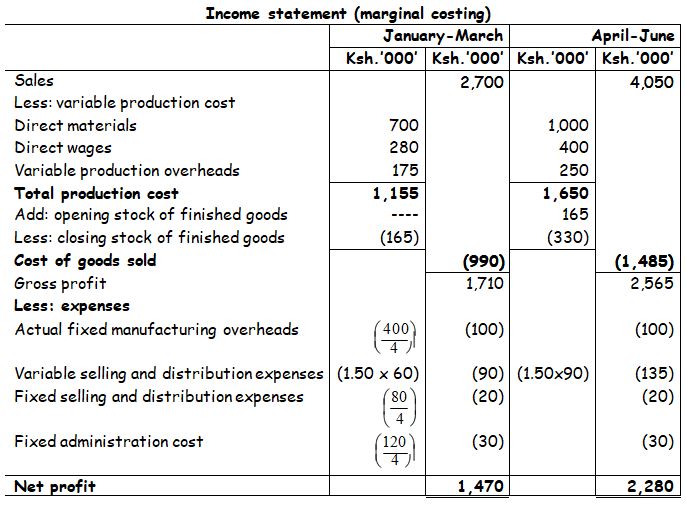 Note: Fixed costs are all assumed to evenly accrue throughout the year

Arguments for the use of marginal costing
 It is simple to operate
 No arbitrary apportionment of fixed cost to products or departments
 Where sales are constant, but production fluctuates, marginal costing shows a constant profit whereas absorption costing shows varying profits
 Under or over absorption of overheads is almost entirely avoided
 Fixed costs are incurred on a time basis e.g. salaries, rent, rates etc, and do not relate to activity. Therefore it‟s logical to write them off in the period they are incurred and this is done using marginal costing
 Accounts prepared using marginal costing more nearly approach the actual cash flow position

Arguments for the use of absorption costing
 Where production is constant but sales fluctuate, net profit fluctuations are less with absorption costing than with marginal costing
 Where the nature of the business is such that stock of finished goods is likely to build, the inclusion of fixed costs in stock valuation is desirable as it is done in absorption costing. Otherwise a series of fictitious loses will be reported in the earlier periods to be offset eventually excessive profits in the subsequent periods when the goods are sold.
 Fixed costs constitute a substantial proportion of costs in many manufacturing concerns in modern industries. Production cannot be achieved without incurring the fixed production costs. It then becomes an inescapable part of the production cost, so should be included in stock valuation as is done in the absorption costing.
 The calculation of marginal costs and the concentration upon contribution may lead to the firm setting selling prices which are below total cost although producing some positive contribution. Absorption costing makes this less likely because it includes fixed production overheads in product cost.

Activity 1
Horizon Ltd is a manufacturing company which products a single product. The following standard unit costs relate to the product:

Fixed manufacturing costs per unit are based on a predetermined absorption rate established at a normal activity level of 45,000 production units per period. Fixed selling and administration costs are absorbed into the cost of sales at 20% of selling price. Under/over absorbed overheads are transferred to the profit and loss account at the end of the period.

The following information is available for two consecutive periods:

Required:
a) Prepare income statements using marginal and absorption costing
b) Prepare a reconciliation statement of profits in (a) above
c) Outline strengths and weaknesses of marginal costing. 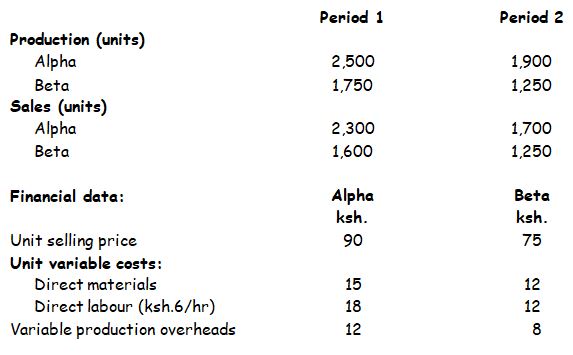