When cost and financial accounts are separately maintained in the two sets of books, two profit and loss accounts will be prepared, one for the costing book and the other for the financial books.

The profit or loss shown the costing books may not agree with that shown the financial books. It therefore becomes necessary to reconcile the two profits or loss figures.

Reasons for the disagreement
Differences in profits or losses between cost and financial accounts may arise due to the following reasons.
1. Items appearing only in the financial accounts.
 Financial charges e.g. loss on sale of assets.
 Discount on bonds or debentures.
 Interest charged on bank loans.
 Fines and penalties.
 Profit on sale of assets.
 Rent receivable.
 Donations etc.

2. Item appearing only in the cost accounts.
Charge for the use of premises which are owned the business where no rent is payable
i.e. notional rent. This will be included in the cost books for purposes of product costing. Since no obligation to pay any third party is created, no entries will be made in the financial books in respect of notional rent.

Under or over absorption of overheads
In cost accounts, overheads are absorbed at a predetermined rate whereas in financial accounts, they are recorded based on the actual cost incurred. This may lead to a difference between overheads absorbed in the cost accounts and overheads actually incurred and charged in financial accounts. Such differences should be written off in the costing profit and loss account. However, where over or under absorbed overheads are not transferred to the costing profit and loss account, it results into a difference in the profits shown the two sets of books calling for reconciliation.

Different bases of stock valuation
In cost accounts stocks are valued according to the methods adopted like FIFO, LIFO, NIFO etc. On the other hand, valuation of stock in financial accounting is based on the principle of cost or realizable value whichever is lower.

Illustration
Dominion Ltd. operates separate cost accounting and financial accounting systems. Given below is the manufacturing and trading statements of the company for the year ended 30th June 2010: 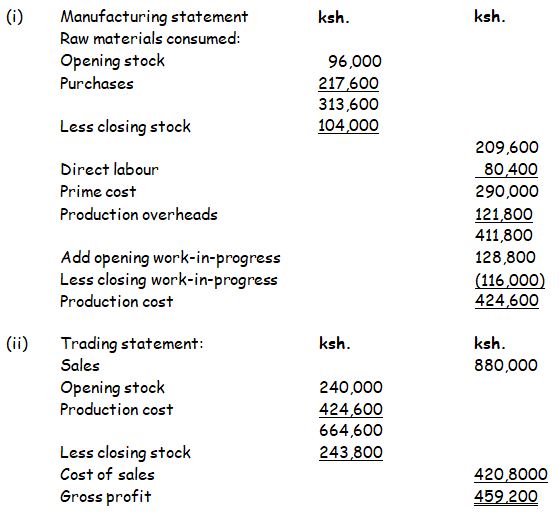 The following information was extracted from the cost accounts: 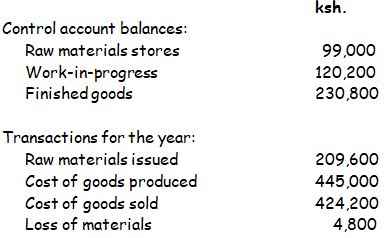 Additional information:
(i) A notional rent of ksh. 8,000 per month has been charged in the cost accounts.
(ii) Production overhead was absorbed at the rate of 185% of direct wages. 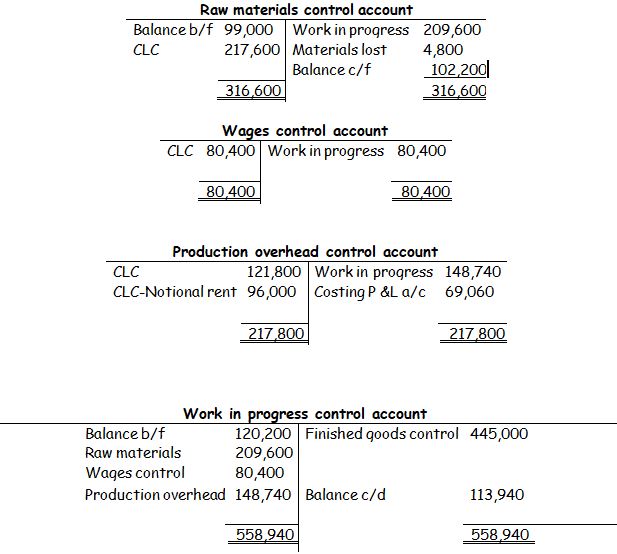 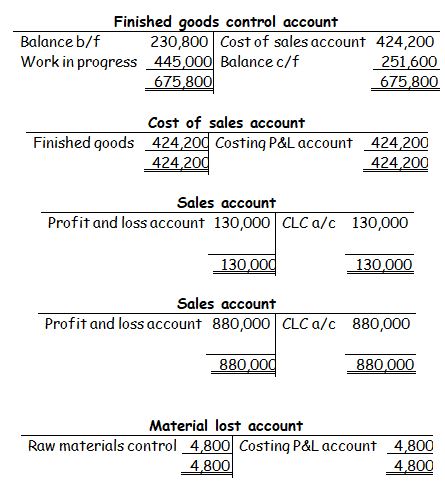 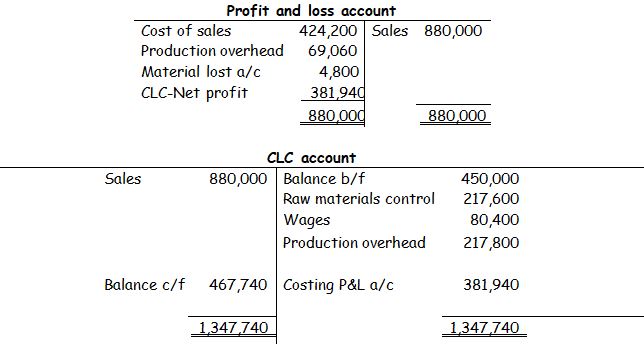 Activity 1
Millennium Fabricators Ltd is a company engaged in the manufacture of specialist marine engines. It operates a job costing accounting system which is not integrated with financial accounts.

At the beginning of the month of May 2010, the operating balances in the cost ledger were as follows:

Of the total wages paid ksh 12,500,000 was incurred in the assembly of manufacturing equipment ksh. 35,700,000 was indirect wages and the balance was direct wages.

Other production overhead costs incurred amounted ksh. 152,000,000. ksh. 30,000,000 or which was absorbed the manufacturing equipment under assembly while ksh7,500,000 was under absorbed overhead costs written off.

One of the engines manufactured the company is produced under license. During the month of May 2010 ksh 2,100,000 was paid as royalty for that particular engine.

The company‟s gross profit margin is 25% on factory cost.

At the end of May 2010, the stock of work in progress had increased ksh. 12,000,000. The manufacturing equipment under assembly was completed within the month and transferred out of the cost ledger at the end of the month.

Required:
Prepare:
a) Control accounts in the cost ledger
b) A statement showing the profit as per the cost accounts
c) Extract a trial balance at the of the period

Activity 2
The following are the transactions of XYZ Ltd. for the month of February 2010