a) Network topology
This refers to the method of arranging and connecting the nodes of a network.

STAR TOPOLOGY
With this topology, there are a number of small computers or peripheral devices linked to a central unit called a main hub. The central unit may be a host computer or a file server. All communications pass through the central unit and control is maintained polling. This topology is commonly used for linking microcomputers to a mainframe 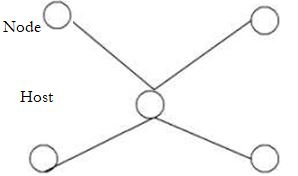 This topology has high cabling costs associated with it since there must be a connection to and fro the central unit each node (terminal) in the network to the individual devices.

The star topology lowers in performance as the number of nodes increase. The central unit in such a case, will be faced with a larger number of nodes to service and since it can only handle one request from a node at a time then there will be a longer waiting time incurred nodes wishing to use the central unit.

This topology could be used to reduce the redundancy of the data stored on the network providing a centralized data store on the central unit.

BUS TOPOLOGY
In this topology, each device handles its communication control. There is no host computer, however there may be a file server. All communication travel along a common connecting cable called a bus. The bus network is a common arrangement for sharing data on different microcomputers.
Diagram:

The bus configuration requires very little cable to connect the computers and therefore it‘s less expensive than other cabling arrangements.

As the number of nodes increases, the performance of the bus topology decreases. A large number of nodes would result in heavy network traffic, which would slow down a bus considerably since computers would interrupt each other and use a lot of bandwidth.

This topology may also be used to eliminate data redundancy on the network. In this case, a file server is used to provide a centralized shared data store. All the other nodes wishing to use the data could access the file server through the bus.

RING TOPOLOGY
In this topology, each device is connected to the other devices, forming a ring. There is no central file server or computer. Messages are passed around the ring until they reach their destination. This topology is commonly used to link mainframes over wide geographical areas. 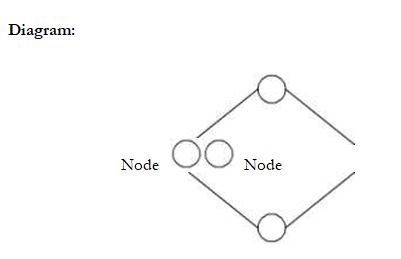 A lot of cable is required for this topology and hence the cabling costs are very high.

This topology has low fault tolerance since failure of one component on the network can affect the whole network.

The larger the network, the more the time it takes for data to travel round the ring and hence the longer the wait time for a distant destination node along the ring.

This topology does not eliminate data redundancy since there is no central computer or file server to provide a centralized shared access to stored data.