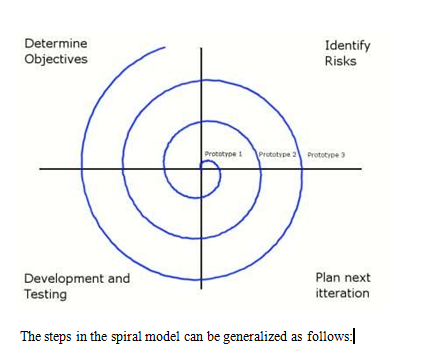 The steps in the spiral model can be generalized as follows:

1. The new system requirements are defined in as much detail as possible. This usually involves interviewing a number of users representing all the external or internal users and other aspects of the existing system.
2. A preliminary design is created for the new system.
3. A first prototype of the new system is constructed from the preliminary design. This is usually a scaled-down system, and represents an approximation of the characteristics of the final product.
4. A second prototype is evolved a fourfold procedure: (1) evaluating the first prototype in terms of its strengths, weaknesses, and risks; (2) defining the requirements of the second prototype; (3) planning and designing the second prototype; (4) constructing and testing the second prototype.
5. At the customer’s option, the entire project can be aborted if the risk is deemed too great. Risk factors might involve development cost overruns, operating-cost miscalculation, or any other factor that could, in the customer’s judgment, result in a less-than-satisfactory final product.
6. The existing prototype is evaluated in the same manner as was the previous prototype, and, if necessary, another prototype is developed from it according to the fourfold procedure outlined above.
7. The preceding steps are iterated until the customer is satisfied that the refined prototype represents the final product desired.